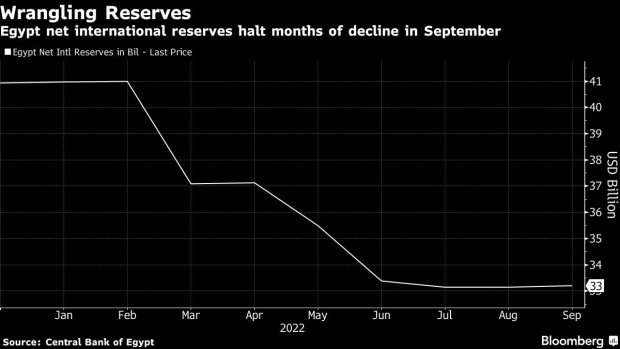 Egypt’s net international reserves rose slightly for the first time since April, providing a measure of relief as the North African nation seeks a loan from the International Monetary Fund.

The figure increased to $33.198 billion in September, from $33.142 billion the month before, the central bank said Wednesday in a statement.

The mild rise comes as the most populous Arab nation wrestles with the economic shock-waves of the Russian invasion of Ukraine. Food and fuel bills have soared, with inflation near a four-year high. Foreign investors have pulled $22 billion out of the local debt market since March.

Read: Egypt Seeks Up to $6 Billion by June From Sale of State Firms

Egypt is in talks with the IMF for support while it also works on attracting more foreign direct investment, including plans to offer parts of state-owned enterprises, and boosting exports.

Finance Minister Mohamed Maait told Bloomberg in September that authorities hope to reach an IMF deal within one or two months, although the loan amount is yet to be determined. Goldman Sachs Group Inc. and Bank of America Corp. have estimated Egypt may need to secure $15 billion, although Maait previously said it’s seeking a smaller amount. Analysts have said the figure could be from $3 billion to $5 billion.

The IMF and the World Bank hold annual meetings next week in Washington.

In the meantime, Egypt has secured pledges of more than $22 billion in deposits and investments from its energy-rich Gulf Arab allies. Maait has said possible financing from Japan and China is also on the table.

The central bank last month kept interest rates unchanged, but increased the amount of money that commercial lenders must set aside as part of their mandatory reserves. The step was seen as an indirect form of tightening that avoids increasing debt-servicing costs for one of the Middle East’s most indebted nations.

Investors are also watching Egypt’s currency, which was devalued by about 15% in March and has slowly depreciated. It hit a record low on the offshore market on Tuesday. An Egyptian official recently signaled the government now favors a more flexible exchange rate to support the economy.