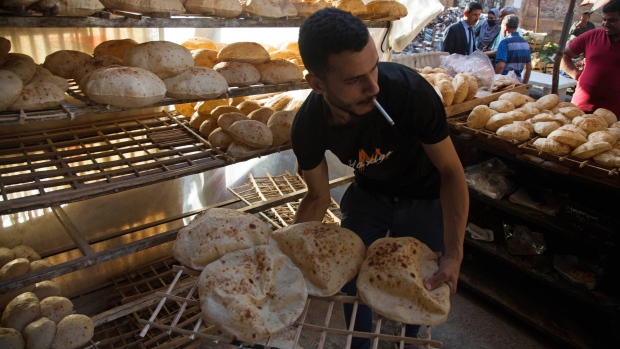 A worker arranges freshly baked bread for sale at the Al-Monira market in Cairo, Egypt, on Wednesday, June 1, 2022. Global food prices are soaring near the fastest pace ever as Russia’s invasion of Ukraine chokes crop supplies, with Egypt, the world’s biggest wheat buyer, now grappling with higher import bills as the conflict causes a run-up in grain and energy costs. , Bloomberg

Egypt’s state-run buyer is negotiating privately with traders to purchase wheat, making a rare shift from its usual tender process.

The nation’s General Authority for Supply Commodities is seeking direct offers for wheat on Monday, according to traders who asked not to be identified because the matter is private. The country is seeking supply for September and October and offers should be valid until Tuesday, three of them said.

Egypt’s government has traditionally only bought wheat cargoes via tenders. Just last week, it scooped up 815,000 tons, marking its largest single purchase since at least 2012. However, Bloomberg reported in April that it planned to soon allow buying wheat via direct offers to the supply ministry, seeking to avert supply disruptions from the war in Ukraine.

GASC did not immediately answer calls seeking comment. The talks were first reported by Reuters.

Egypt is among the world’s largest wheat importers, and its purchases are closely tracked by the market. It has historically sourced much of its grain from Black Sea producers, while it also bulked up on French cargoes in its purchase last week.