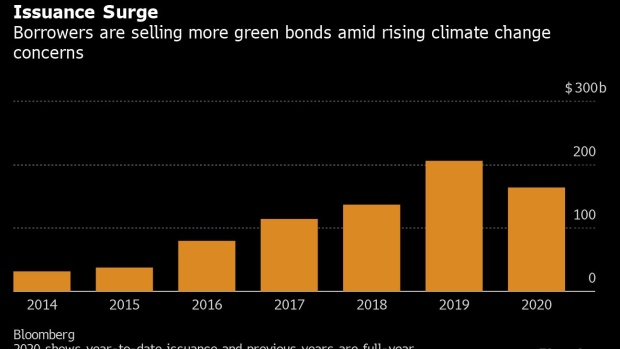 (Bloomberg) -- Egypt is poised to sell the first-ever sovereign green bond from the Middle East and North Africa as soon as on Tuesday as the nation readies anti-pollution and renewable-energy projects.

The $500 million sale of five-year notes will go ahead subject to market conditions, according to a person familiar with the matter who asked not to be identified because the details aren’t public.

Egypt has prepared a $1.9 billion portfolio of potential green projects as part of a wider strategy aimed at locking in new sources of financing and broadening its investor base. It’s seizing on a global surge in investor interest in environmentally-friendly financing: the assets of sustainable index mutual funds and exchange-traded funds have doubled to $250 billion in the past three years, according to Morningstar.

“Egypt has a lot of natural potential to develop renewables, especially solar projects,” said Apostolos Bantis, a Managing Director at UBP’s Fixed Income Advisory Team. “Gaining access to the green bond market would allow the country to advance its renewables energy investments while also building a reputation as a forward-thinking energy developer.”

The country also plans to issue its first sukuk, or Islamic bonds, in both local and international markets in the fiscal year that started in July. After a record Eurobond sale in May, the Arab world’s most populous nation is considering issuing up to $7 billion this fiscal year.

International investors have pumped billions of dollars into Egypt’s debt market since a 2016 currency devaluation, part of a sweeping economic program. Foreign holdings of local debt jumped to $16.9 billion by end of August from $14.1 billion a month earlier.