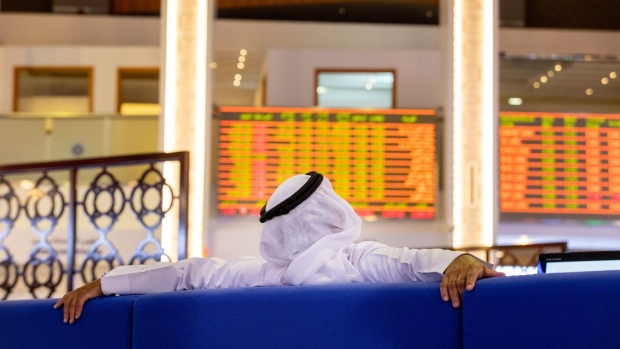 An investor watches stock price movements on an electronic screen at the Dubai Financial Market PJSC (DFM) in Dubai, United Arab Emirates, on Sunday, Sept. 6, 2020. Dubai made a rare foray into public bond markets, revealing along the way that its debt burden is now a lot smaller than estimated by analysts only months ago. Photographer: Christopher Pike/Bloomberg , Bloomberg

The EGX 30 climbed as much as 0.8%, boosted by Commercial International Bank as well as real estate stocks including Palm Hills Developments SAE and Medinet Nasr Housing. The benchmark index had dropped 1.3% last week, its fourth consecutive weekly decline.

Egypt’s Monetary Policy Committee reduced the deposit rate to 8.75% from 9.25% on Thursday after markets had closed. All but two of 11 economists surveyed by Bloomberg predicted no change. The lending rate was decreased by the same amount to 9.75%.

The central bank “saw the need to act in light of the successive depressed inflation readings, with inflation hitting a near one-year low in August,” Mohamed Abu Basha, head of macroeconomic research at Cairo-based EFG Hermes, wrote in a note. Still, he said the cut was “small.”

In Saudi Arabia, the main equity index advanced 0.5% after dropping 1.2% last week -- its first weekly loss since June. The kingdom is preparing for a quick rebound in tourism and hasn’t revised its visitor targets for 2021 despite the pandemic, Tourism Minister Ahmed Al-Khateeb said.