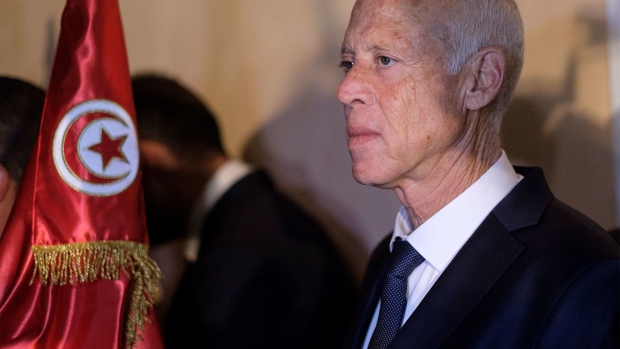 TUNIS, TUNISIA - OCTOBER 13: Tunisian presidential candidate Kais Saied talks to media after the first exit poll in presidential runoff vote suggest he is set to become president of Tunisia with around 76% of the votes on October 13, 2019 Tunis, Tunisia. Kaïs Saïed, 61, is a conservative academic and jurist, specialized in constitutional law. He has been president of the Tunisian Association of Constitutional Law since 1995. He is an independent candidate and was pitted against business tycoon Nabil Karoui, 56, in the second round of the presidential elections. (Photo by Thierry Monasse/Getty Images) , Photographer: Thierry Monasse/Getty Images

Egypt’s Foreign Ministry on Sunday said it backed the “legitimate aspirations” of the Tunisian people, offering its support to the North African nation’s president after he froze parliament and fired the prime minister.

The statement said Egypt had “confidence in the wisdom and ability of the Tunisian presidency to move the country from the current crisis” soon.

The steps last week by Tunisian President Kais Saied had thrust the country into its more serious constitutional crisis since the 2011 uprising that ousted the longtime leader Zine El Abidine Ben Ali. Saied has said he acted to save the nation from plunging deeper into chaos, though his critics, most notably the moderate Islamist Ennahda Party, dubbed his actions a coup.