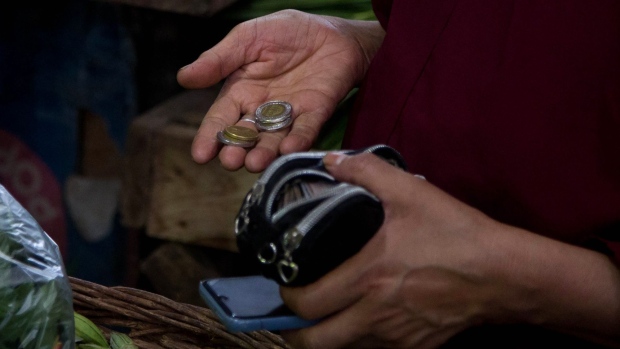 A customer selects Egyptian currency coins at the Al-Manhal market in the Nasr city district of Cairo, Egypt, on Wednesday, June 1, 2022. Global food prices are soaring near the fastest pace ever as Russia’s invasion of Ukraine chokes crop supplies, with Egypt, the world’s biggest wheat buyer, now grappling with higher import bills as the conflict causes a run-up in grain and energy costs. Photographer: Islam Safwat/Bloomberg , Bloomberg

(Bloomberg) -- Investors are betting on a deeper slide in the Egyptian pound as the North African nation awaits final approval for a $3 billion loan from the International Monetary Fund.

Derivatives traders have stepped up wagers that Egypt will let its currency weaken by as much as 20% over the next 12 months. And with the IMF’s executive board preparing to meet on Dec. 16, there’s debate over whether the Washington-based lender will be convinced by the pace of the pound’s decline in the spot market since November.

There are signs the currency is “still being somewhat managed” and the IMF may need further proof Egypt has adopted a truly flexible exchange rate, said Gordon Bowers, a London-based analyst at Columbia Threadneedle Investments. He expects either another devaluation or an accelerated pace of depreciation before the meeting.

Not everyone agrees. Mohamed Abu Basha, head of macroeconomic research at Egyptian investment bank EFG Hermes, said he didn’t believe further weakness for the pound was “necessarily conditional” before Dec. 16. Authorities have taken steps such as canceling subsidized lending programs and drafting a new document on state ownership polices in compliance with the IMF agreement, he said.

The North African nation devalued the pound in March, and then again by 18% in late October on the same day that it announced the IMF deal. Facing surging import bills and an exodus of foreign money exacerbated by the impact of Russia’s invasion of Ukraine, Gulf allies have rushed to Egypt’s aid with pledges of deposits and investments. Its currency has slumped to record lows and is the worst performer in the world this quarter after Ghana’s cedi.

Since the start of November, the currency has weakened by less than 2%, trading offshore at 24.6 against the dollar early Friday. Concerns about inflation, which is already at a near-five-year high, and the impact on social stability in the country of 104 million people may be putting constraints on policy, analysts say.

Offshore derivatives traders see steeper declines in the months ahead. In the non-deliverable forwards market, the one-month contract on the pound has slumped about 6% this month to 26.6 per dollar while the 12-month slid to 30.9. The latter bet signals a 20% drop in the currency from the current level.

The central bank’s plan to remove a requirement for importers to acquire letters of credit to buy goods abroad is set to put further pressure on the currency. Egypt needs to clear a backlog of requests  — estimated at over $5 billion — from importers and companies to access hard currency, a move seen to unleash a wave of further selling in the pound.

“Greater US dollar liquidity is needed to help clear the backlog,” said Monica Malik, chief economist at Abu Dhabi Commercial Bank. “If the delays continue, it will again raise market concerns over the flexibility of the FX regime and ability to repatriate funds.”

Tighter global conditions combined with Egypt’s high gross financing needs and limited market inflows could widen the nation’s funding gap and weigh on its foreign-exchange reserves, according to JPMorgan Chase & Co. There will be more pressure on the pound as there is limited capacity for sustained interventions to keep the currency stable, the bank’s economists said.

“The flexible exchange-rate regime might be eventually unavoidable,” JPMorgan’s Gbolahan Taiwo and Francesco Arcangeli wrote in a report.

--With assistance from Tarek El-Tablawy and Mirette Magdy.

(Adds comments by JPMorgan’s economists in 10th and 11th paragraphs)