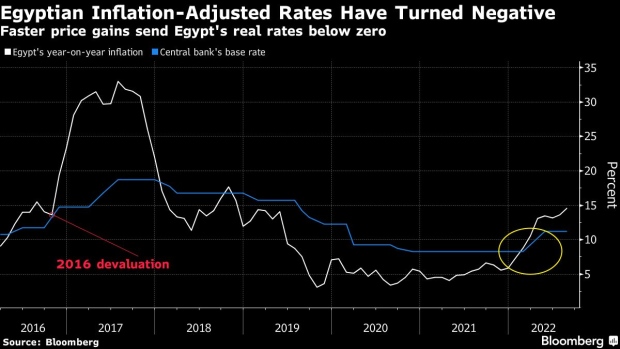 Under-construction skyscraper buildings in the central business district (CBD) beyond residential complexes in Egypt's New Administrative Capital, east of Cairo in Egypt, on Wednesday, July 27, 2022. Egypt's government needs to take further steps to foster private-sector development, improve governance and reduce the role of the state, the International Monetary Fund said, as the country seeks a new loan to bolster an economy hit by fallout from the war in Ukraine. Photographer: Islam Safwat/Bloomberg , Bloomberg

(Bloomberg) -- Egypt’s central bank is plotting out its next moves on interest rates to get a grip on inflation that only threatens to get worse because of depreciation pressure on the pound.

The fastest increases in consumer prices since 2018 mean monetary tightening is likely to resume this week. But the market is also on the lookout for more guidance from policy makers, with the currency still weakening and in the spotlight after its devaluation earlier this year.

Though economists are divided over what the central bank will do on Thursday, a survey by Bloomberg found most expect a hike of 50 to 100 basis points. The Monetary Policy Committee has kept the benchmark deposit rate at 11.25% for two meetings.

“More than just the decision on rates, the market will be looking for clues about broader monetary policy directions and any hints about the central bank’s future moves,” said Mohamed Abu Basha, head of macroeconomic research at investment bank EFG Hermes. “A 100 basis-point hike seems warranted.”

Policy makers are gathering under the leadership of Hassan Abdalla, who became acting governor last month after Tarek Amer’s surprise resignation just a day before the previous rate meeting. The dilemma is how to manage inflation shocks after Russia’s invasion of Ukraine stoked the costs of commodities and Egypt allowed its pound to weaken.

Adding to the intrigue are talks with the International Monetary Fund, which favors a more flexible exchange rate. Pressure is still mounting on Egypt’s currency even after it was devalued by about 15% in March, with economists saying it needs to fall further.

Traders are also betting that Egypt will allow further depreciation since the departure of Amer, who’d been in the role for about seven years and was seen as supportive of a stable pound. A minister recently said that the government now backs a more flexible currency to support the economy.

“A currency devaluation in Egypt is probably imminent. The country is nearing a deal with the IMF, which is demanding more pound flexibility. The resignation of former central bank governor Tarek Amer may indicate a shift in the exchange-rate policy. More importantly, Egypt can’t afford to maintain the current level of the exchange rate.”

Reaching a new agreement with the IMF could help restore investor confidence after some $20 billion in foreign outflows from Egypt’s local debt market this year. Authorities have said they are nearing a deal with the Washington-based lender.

There’s also urgency for the central bank to act after months of quickening price gains turned Egypt’s rates negative when adjusted for inflation, undercutting the country’s appeal to foreign investors in domestic bonds and bills.

Real rates in Egypt, once the world’s highest, are now below such emerging-market peers as South Africa and Indonesia.

Inflation in Egypt reached an annual 14.6% in August after a pickup in global food prices turned into a major burden for one of the world’s biggest wheat buyers. Egypt’s central bank has previously described as “transitory” deviations of inflation from its target of 7%, plus or minus two percentage points, on average in the fourth quarter.

Uncertainty over the pound might present the biggest threat to prices ahead.

Carla Slim, an economist at Standard Chartered Plc, said a one-step depreciation of 20% -- in line with the non-deliverable forwards market -- could push inflation close to levels last seen after the pound’s 2016 devaluation, when annual price increases peaked at over 30%.

The outlook suggests Egypt is more likely to opt for a gradual depreciation to limit its impact on inflation, according to Slim, who also predicts a rate hike of 100 basis points on Thursday.

“A contained pound depreciation would help achieve foreign-exchange flexibility, while limiting the pass-through to consumer prices,” she said.