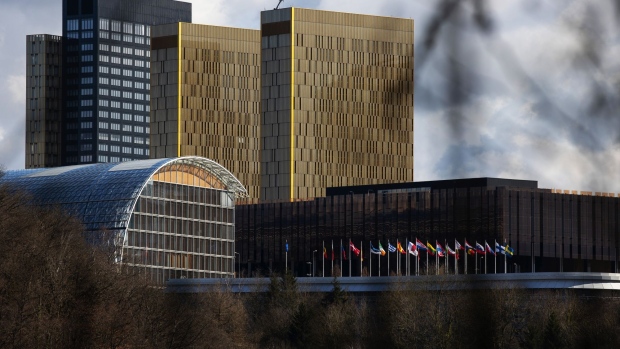 The European Court of Justice skyscraper buildings beside the European Investment Bank (EIB) East building, left, in Luxembourg, on Monday, March 15, 2021. More than 60 financial firms have established operations in the Grand Duchy due to Brexit, according to Nicolas Mackel, the head of Luxembourg for Finance. Photographer: Olivier Matthys/Bloomberg , Bloomberg

(Bloomberg) -- The European Union’s in-house investment bank was criticized by a leading EU lawmaker for its inadequate responses to questions about alleged harassment at the institution.

While 19 out of 24 alleged harassers named in complaints between 2016 and 2020 still work at the bank, almost half of the alleged victims no longer work there, the European Investment Bank said in a Sept. 14 reply to questions by three members of the European Parliament.

The bank’s answer, seen by Bloomberg, “fails to give convincing evidence that allegations of harassment are being taken seriously,” said Sven Giegold, a German member of the EU assembly’s Greens and one of the trio of politicians. “I am not convinced that reporting a case of harassment does not have negative consequences for the alleged victim at the EIB.”

EU lawmakers have been quizzing the EIB following a Bloomberg investigation of alleged workplace harassment that described accusations of sexual harassment, bullying and discrimination at the Luxembourg-based bank, drawing on interviews with more than two dozen current and former employees.

“Out of the 24 persons accused of harassment mentioned in the letter to the MEPs, only 1 has been found to have committed harassment,” an EIB spokesperson said in an email. “For almost all of them, there has not been any finding of harassment against them.”

“The staff member against whom there was a finding of harassment, a disciplinary sanction was imposed which did not lead to the termination of their employment contract,” they said.

In response to the story in April, the bank has said it had never fired anyone accused of harassment. Of the 21 formal complaints alleging harassment received from staff since 2013, five were rejected because they were deemed not to involve harassment, didn’t present evidence harassment had taken place or, in one case, didn’t involve the bank. The others were investigated by external panels.