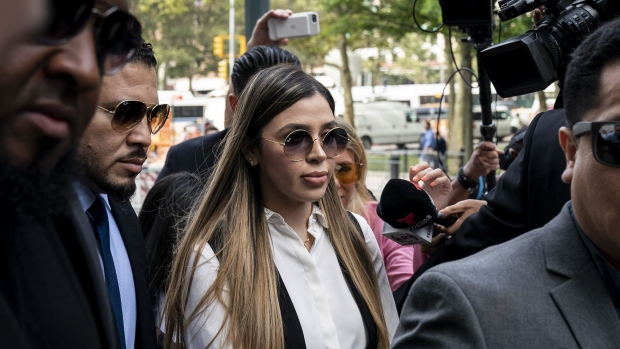 The sentence imposed Tuesday by U.S. District Judge Rudolph Contreras in Washington was shorter than than the four years that prosecutors had requested. Coronel will also be credited with the nine months that she’s already been in custody.

She was arrested at Dulles International Airport in Virginia on Feb. 22 and pleaded guilty to conspiring to distribute drugs and launder the proceeds.

Prosecutors said Coronel participated in the criminal activities of the Sinaloa cartel, which Guzman led. She was also accused of helping her husband break out of a Mexican prison in 2015. She was involved in plotting his escape, passing messages to cartel members and delivering payments to prison employees. Guzman ultimately fled the facility through an underground tunnel.

“As tunnel construction began, the Defendant continued visiting Guzman in Altiplano prison to keep him apprised of the progress,” prosecutors wrote in a sentencing memorandum.

A former beauty queen, Coronel married Guzman in about 2007, when she was 17. After he was extradited to the U.S. in 2017, she became a fixture in the courtroom during her husband’s three-month trial in federal court in Brooklyn, New York.

Guzman was convicted in 2019 on a host of charges including drug trafficking, kidnapping and murder. He is now serving a life sentence at a maximum-security facility in Colorado.