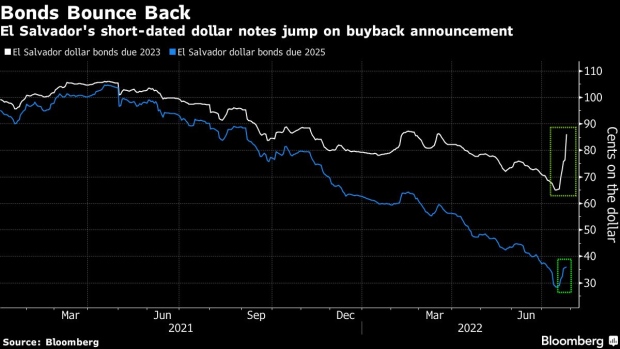 Nayib Bukele, president-elect of El Salvador, speaks to members of the media during the Americas Society/Council of the Americas (AS/COA) 49th Washington Conference on the Americas at the State Department in Washington, D.C., U.S., on Tuesday, May 7, 2019. The conference brings together U.S. administration senior officials and distinguished leaders from across the Americas to focus on the major policy issues affecting the hemisphere. , Bloomberg

(Bloomberg) -- El Salvador President Nayib Bukele announced plans to buy back the nation’s dollar-denominated bonds due in 2023 and 2025, spurring a double-digit jump the price of the junk-rated securities.

Bukele on Tuesday said in a series of tweets that he sent two bills to lawmakers that would lock in plans for a “transparent, public and voluntary” purchase offer that will start in six weeks for the government debt at market prices. Finance Minister Alejandro Zelaya said the nation would use special drawing rights dispersed by the International Monetary Fund, multilateral funding, and a new bond deal with the central bank to finance the purchases.

The nation’s dollar bonds set to mature in January 2023 rose nearly 10 cents after the announcement to 86 cents, according to indicative prices compiled by Bloomberg. The 2025 notes, meanwhile, were up 16 cents to be quoted at 52 cents, the highest since mid-April.

Bukele’s Nuevas Ideas party holds a two-thirds majority in El Salvador’s unicameral legislature, meaning the bills can be swiftly approved. Ernesto Castro, president of the legislative assembly, said the bills will be introduced Tuesday and submitted for discussion and approval to the floor, saying the step was important for the country.

There’s $1.6 billion outstanding in bonds due 2023 and 2025 combined, and Bukele promised to buy them back at their market prices, acknowledging prices may rise once the buyback begins.

Guillermo Guerrero, an analyst at EMFI Group Limited, said he expects prices on the front-end notes to move closer to par as long as the offer is seen as credible. The nation’s bonds have been trading at levels considered in distress, with some traders wary of the government’s financing options.

The question now turns to whether Bukele moves to buy back all of the $1.6 billion in short-term bonds. For Nathalie Marshik, a managing director for fixed income at Stifel Nicolaus & Co., the answer is: “Probably not.”

“Early indication is that there is about $560 million available for the buyback,” she said. “We don’t know yet what the allocation will be between the 2023s and 2025s.”

The country is approaching its one-year anniversary of adopting Bitcoin as legal tender, a move that -- along with a shake-up in the top courts -- stoked some uncertainty among both credit rating agencies and money managers. El Salvador is one of the emerging-market nations most vulnerable to a default, according to a Bloomberg Intelligence analysis earlier this month.

“It makes a lot of sense given the depressed prices of Salvadoran bonds, but I think the government would have obtained better results in terms of saving resources if it had conducted the buyback in a covert way,” said Ramiro Blazquez, head of research and strategy at BancTrust. “There are still many details that we don’t know, such as the magnitude of the buyback. But it’s definitely good news since it sets a floor to prices and it will do much to ease default fears.”