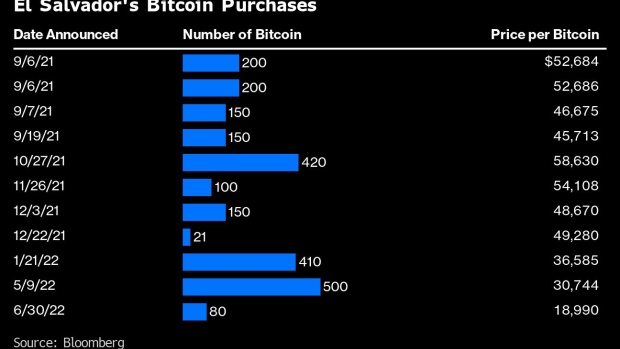 Customers wait to use a Chivo Bitcoin automated teller machine (ATM) in San Salvador, El Salvador, on Saturday, Jan. 29, 2022. The International Monetary Funds board urged El Salvador to strip Bitcoin of its status as legal currency due to its large risks, highlighting a major obstacle for the nations efforts to get a loan from the institution. , Bloomberg

(Bloomberg) -- El Salvador’s President Nayib Bukele is doubling down on his bet on cryptocurrencies, despite a brutal selloff in the market over the past months.

The government bought 80 Bitcoins on Thursday at the cost of $19,000 each, according to a tweet from Bukele. That brings the total amount the nation spent buying Bitcoin since it was approved as legal tender last year to $106.3 million, according to calculations by Bloomberg based on Bukele’s tweets. These holdings are now worth about $45.8 million, implying a 57% loss.

Bitcoin has tumbled 63% since Bukele’s first purchase in early September of last year. The government doesn’t publish data on its cryptocurrency holdings.

“It’s clear President Bukele’s bullishness is not diminished by Bitcoin’s near 60% year-to-date decline,” John Roque, technical analyst at 22V Research wrote in a note. “It won’t surprise us if he’s still bullish when bitcoin trades at our target of $10,000.”

El Salvador’s gamble on Bitcoin is exacerbating a debt crisis in the financially troubled country, which has been struggling to deal with wide fiscal deficits as an $800 million bond comes due in January. The average spread of the Central American nation’s dollar debt over US Treasuries widened about 10 percentage points to 27.04 points in the second quarter, according to JPMorgan indexes, the most in Latin America.

Concern over El Salvador’s ability to get the funding it needs to roll over looming debts pushed S&P Global Ratings to downgrade the nation to CCC+ this month, a move that put it on par with Ukraine and Argentina. Most of the nation’s dollar bonds now trade at around 35 cents on the dollar, deep in distressed territory.