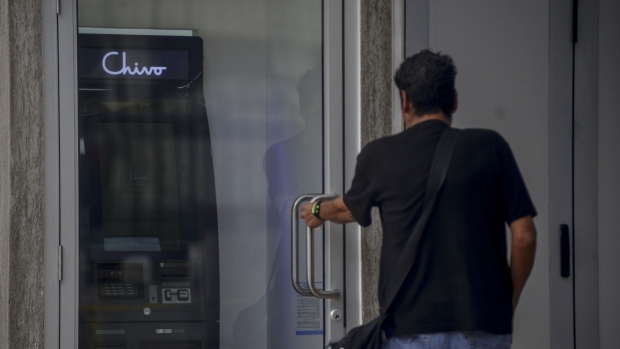 A pedestrian opens a door to a Chivo Bitcoin automated teller machine (ATM) booth at Gerardo Barrios plaza in San Salvador, El Salvador, on Saturday, Aug. 28, 2021. El Salvador began installing Bitcoin ATMs, allowing its citizens to convert the cryptocurrency into U.S. dollars and withdraw it in cash, as part of the government’s plan to make the token legal tender. Photographer: Camilo Freedman/Bloomberg , Bloomberg

(Bloomberg) -- El Salvador is doubling down on its Bitcoin bet as the price plunges, with its president saying, “They can never beat you if you buy the dips”.

The country took advantage of the recent fall in prices to buy another 150 coins, taking its total to 700, President Nayib Bukele said in a post on Twitter. Bukele made the comments late Sunday night, before the sell-off accelerated on Monday.

The volatile cryptocurrency has lost about 16% of its value since Bukele announced the first purchases on Sept. 6. The nation’s coins are worth about $31 million at current prices.

Prices of Bitcoin and other digital currencies slumped on Monday as a broad selloff sparked by worries about contagion from China Evergrande Group swept through global markets. Bitcoin dropped as much as 10.7% to $42,522 in New York trading hours, to its lowest level since the beginning of August.

El Salvador made Bitcoin legal tender alongside the dollar from Sept. 7 in the biggest test so far of the currency’s usefulness as a medium of exchange.

Bukele recently changed his Twitter profile to read, “Dictator of El Salvador”, an apparent response to comments by anti-government protesters who accused him of dictatorial tendencies after he fired supreme court justices and the attorney general, and began preparing constitutional reforms that would change term limits and allow him to stay in office.