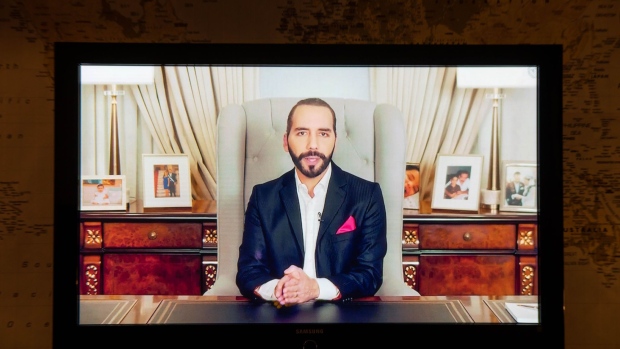 (Bloomberg) -- El Salvador intends to issue the world’s first sovereign Bitcoin bonds and build Bitcoin City, which will be free of income, property and capital gains taxes, President Nayib Bukele announced in the beach town of Mizata to a crowd of cheering Bitcoin enthusiasts.

El Salvador plans to issue $1 billion in tokenized U.S.-dollar denominated 10-year bonds to pay 6.5% via the Liquid Network, according to Samson Mow, chief strategy officer of Blockstream. Half of the funds of the so-called “volcano bond” will be converted to Bitcoin and the other half will be used for infrastructure and Bitcoin mining powered by geothermal energy, Mow said, while sharing the stage with Bukele.

After a 5 year lockup period, the government will begin to sell its Bitcoins and pay an additional dividend to investors, Mow said. He told Bloomberg News on Thursday about his proposal.

Blockstream models show at the end 10th year of the bond the annual percentage yield will be 146% due to Bitcoin’s projected appreciation, Mow said, forecasting Bitcoin will hit the $1 million mark within five years. He said the lockup period on the bonds is designed to take $500 million in Bitcoin out of the market for five years, adding to their scarcity and value.

The plans will make “the financial center of the world” and “the Singapore of Latin America,” Mow said, adding he expects other countries to follow suit. “The first countries that do this will have a massive advantage. This is the beginning of nation state Bitcoin FOMO,” Mow said, referring to “fear of missing out”.

Investors will also be awarded permanent residence and be fast-tracked to citizenship, Mow said while standing next to Bukele.

Bitcoin City will be built near the Conchagua volcano which will provide energy for mining, Bukele said, adding that Bitcoin bond issuance will begin in 2022. The only tax in Bitcoin City will be a 10% value-added tax to fund city construction and services, he said.