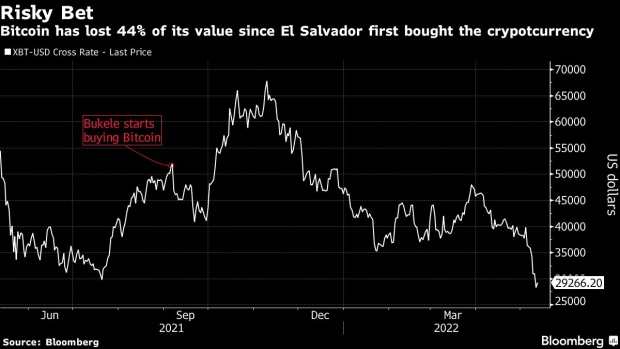 (Bloomberg) -- El Salvador’s gamble on Bitcoin has already cost the nation’s cash-strapped government enough to cover its next interest payment to bondholders, showing the increased risks posed by its experiment with the cryptocurrency.

The rout that has driven Bitcoin down some 40% since late March has deepened President Nayib Bukele’s cumulative losses on the government’s holdings to about $40 million, according to an estimate by Bloomberg. That’s a little more than the country’s next coupon payment on its foreign debt, with $38.25 million due in June 15 on notes maturing in 2035.

Bukele’s government spent about $105 million buying Bitcoins since becoming the world’s first government to make it legal tender in September, based on his announcements on Twitter. The crypocurrency has fallen 45% since the first purchase, cutting down the value of the nation’s 2,301 Bitcoins to about $66 million.

That’s another blow to Bukele, a devout believer in cryptocurrencies who has been trying for more than five months to sell a Bitcoin-backed bond. But investors have soured on El Salvador’s bonds, concerned not only with the government’s ability to keep current on its debt but its willingness to do so.

Bukele’s office declined a request for comment from Bloomberg News. The government doesn’t publish data on its Bitcoin holdings.

Prices on the country’s foreign debt tumbled about 18% this year, leaving bonds due in 10 and 30 years trading at around 40 cents on the dollar, deep into distressed territory. The next principal payment is in January for $800 million. The 22% price discount at which the notes are trading suggests some hesitation from investors on whether the obligation will be met.

El Salvador owes bondholders $382 million in interest this year, with July being the heaviest month for payments as $183 million comes due. The nation had $3.4 billion in reserves in April, according to the central bank, and the government plans to raise $1 billion with the Bitcoin-backed bond, though it’s not clear at this point whether the transaction will go through.

The nation was also in talks with the International Monetary Fund for an extended fund facility, but negotiations stalled after Bukele adopted the cryptocurrency as a legal tender. Since then, the spreads on the nation’s credit default swaps -- a type of insurance against missed payments -- have risen more than 20 percentage points, implying an 87% chance of a default in the next five years.