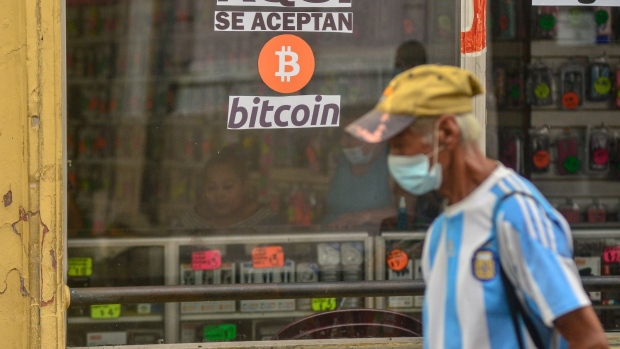 A pedestrian walks by a cellphone accessories shop that accepts Bitcoin in the Historical Center of San Salvador, El Salvador, on Thursday, Sept. 30, 2021. The government's new digital wallet, called Chivo, was designed to facilitate Bitcoin transactions, but the ease with which users can top up their balances and switch instantly between dollars and tiny, fractional amounts of the cryptocurrency makes it a perfect tool for speculation. , Bloomberg

(Bloomberg) -- A survey by El Salvador’s Chamber of Commerce found that the vast majority of companies in a country known for its Bitcoin-boosting president haven’t used crypto for business.

Only 14% of respondents to the Chamber of Commerce Survey said they had transacted in Bitcoin since September, when the country became the first in the world to recognize the digital token as legal tender.

More than 90% of the 337 companies polled between January 15 and February 9 said Bitcoin adoption in the country had little to no impact on their sales. Of the businesses polled, 71% were classified as micro or small businesses, 13% as medium-sized companies and 16% as large, according to the survey.

Despite the lackluster embrace of Bitcoin since its roll-out, El Salvador is pressing ahead with plans to issue what would be the first state-backed Bitcoin bonds in the coming days, according to Finance Minister Alejandro Zelaya.

Samson Mow, who recently left Blockstream to consult on what he described in a tweet as “nation-state Bitcoin adoption”, told Bloomberg he expects the bond to be issued through the state utility company LaGeo.

“From my perspective, it makes sense as they will be setting up a volcano mining facility and LaGeo operates their geothermal plants,” Mow said. La Geo did not return requests for comment.