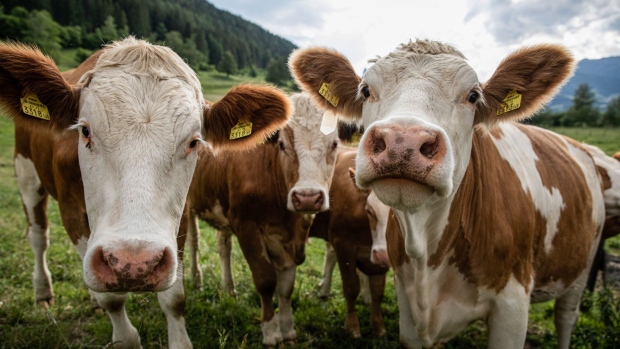 Cows graze in a field near Feistritz am Kammersberg, Austria on Wednesday, June 24, 2020. CLT uses a high-tech manufacturing process that turns ordinary wooden planks, often made from Spruce trees, into structures that can bear thousands of tons of weight. Photographer: Akos Stiller/Bloomberg , Bloomberg

(Bloomberg) -- Activist investor Sachem Head Capital Management has made its biggest bet yet, taking a $1.2 billion stake in Elanco Animal Health Inc. to push for changes at the company.

The New York-based investment firm, which owns a 9.1% stake in Elanco in stock and options, believes the company is undervalued and underperforming its competitors, including its larger rival Zoetis Inc., according to people familiar with the matter. Sachem Head believes there is a significant opportunity for Elanco to accelerate sales and improve its margins and research and development pipeline, the people said, asking not to be identified because the matter is private.

Elanco shares jumped as much as 13.3% Wednesday. They traded up 12.4% at 11:10 a.m. in New York, giving the company a market value of almost $15 billion. The stock had fallen about 4% this year through Tuesday.

“We are aware of the investment by Sachem Head. The Elanco board and leadership team are committed to continuing our focus on enhancing value for all shareholders and will continue to take actions to achieve that objective through our clear and proven innovation, portfolio and productivity strategy,” said Colleen Parr Dekker, a spokesperson for the Greenfield, Indiana-based company, in an emailed statement.

Elanco, which was spun out from Eli Lilly & Co. in 2018, is the second-largest competitor in the global animal-health industry. Sachem Head believes the sector has several attractive features, including increasing spending on pets, a consolidated market and a high barrier to entry. Demand for livestock is also expanding as global wealth rises. Unlike products for people, those for animals are less subject to political pressures.

Despite those advantages, Sachem Head believes Elanco has made several missteps that have rattled investor confidence, including a poorly timed acquisition of Bayer AG’s animal-health assets last year, the people said. That deal, on which Elanco spent $6.9 billion less than a year after its initial public offering, didn’t close until August, amid the pandemic. The company has also experienced some short-term supply chain challenges after consolidating its distributor network, among other issues, they added.

Sachem Head also thinks the company could improve its margins. Elanco had a trailing 12-month earnings before interest, taxes, depreciation and amortization margin of about 18% at the end of the first half, compared to about 44% at Zoetis, according to data compiled by Bloomberg. Last month, Elanco began taking steps to improve the metric by announcing a restructuring plan that would eliminate more than 900 jobs in 40 countries. It also said it paid $100 million on its term loan to reduce its debt load.

Sachem Head believes there is an opportunity for Elanco to bring revenue growth in line with its peers, in part through improving its R&D pipeline, and to narrow its trading discount to its peers by improving sales and margins, the people said. Prior to the pandemic, Elanco had been targeting a 31% Ebitda margin in 2022.

The investment, which is Sachem Head’s largest to date, is familiar territory for the fund. In 2014, Sachem Head, alongside managing partner Scott Ferguson’s former firm, Pershing Square Capital Management, agitated for changes at Zoetis. At the time, Zoetis was experiencing similar issues, including a lagging share performance, weak margins and a poor pipeline for new products.

Zoetis revenue grew to $6.3 billion last year from $4.6 billion in 2013, the year before Sachem Head began pushing for changes at the company. It has also improved its Ebitda margin to 44% from 29% over the same period.

Sachem Head was founded in 2013 by Ferguson, a former partner at Bill Ackman’s Pershing Square. The firm, which has over $3 billion in assets under management, has agitated for changes at several companies, including most recently Olin Corp., as well as 2U Inc., where it pushed for a sale of the educational software company.

(Updates with details of filing, shares from third paragraph)