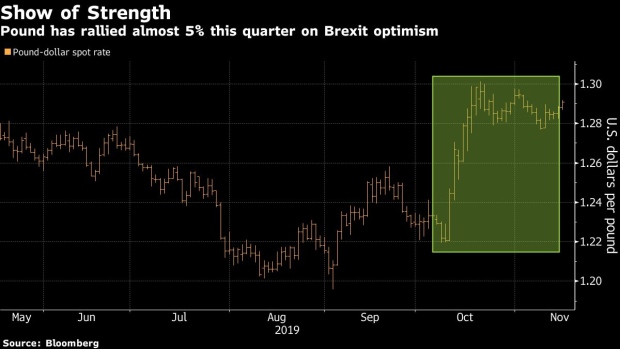 Commuters walk down a set of stairs leading to the Thames Path in London, U.K., on Friday, Nov. 8, 2019. Living standards in the U.K. are on the cusp of returning to their pre-crisis levels in an election boost for Prime Minister Boris Johnson. Photographer: Simon Dawson/Bloomberg , Bloomberg

(Bloomberg) -- With all the focus on getting the positioning right for next month’s U.K. election, investors may be overlooking bigger threats beyond.

Even as optimism grows that Prime Minister Boris Johnson’s party will win the vote and see through a market-friendly Brexit deal, a floundering economy and the prospect of fraught trade talks with the European Union are unnerving some. Allianz Global Investors warns against “complacency” and Algebris Investments sees the pound staying under pressure in the longer term.

Sterling has surged about 5% this quarter as Johnson secured a withdrawal pact with the EU and got a preliminary approval for it from lawmakers, dissipating market anxiety about a no-deal Brexit. Yet, the annual pace of economic expansion has slumped to the slowest in almost a decade, and Societe Generale SA strategist Kit Juckes sees the effects of Brexit shaving half a percentage point off growth every year over the coming decade.

“Over the long term, there is probably some complacency,” said Kacper Brzezniak, a portfolio manager at Allianz Global. “The deal currently being proposed by Johnson and the rest would have been considered the hardest of hard Brexits before where people had forecasts like $1.15 for sterling. Now it looks like if we avoid a no-deal people are going to be relieved.”

Brzezniak is currently neutral on the pound but aims at shorting the currency if it climbs to $1.32 or higher, from Friday’s levels around $1.29. Sterling gained about 1% this week as opinion polls suggested support is on the rise for the ruling Conservative Party ahead of the Dec. 12 vote.

The currency may climb to $1.34 should Johnson’s party win, seen as the most likely outcome, according to a Bloomberg survey last week. The next most likely scenario -- a Labour Party-led coalition -- would only send the pound down less than 1% in the short term, the survey showed.

Even if Johnson manages to finalize the current deal with the EU, that would only mark of the first phase of Brexit -- leaving Britain and the bloc with the tough task of forging a brand new trade relationship, according to Jane Foley, head of currency strategy at Rabobank.

“I don’t think the foreign-exchange market is really taking on board the trade talks, the part two of Brexit,” Foley said at a conference at Bloomberg’s office earlier this week. “There’s a very short window of opportunity for the trade talks and I fear that if they don’t start well then the market may start to reprice what a Tory government means for sterling.”

U.K. equities are also advancing on optimism a victory for Conservatives. Mid-cap stocks that are typically more sensitive to the domestic economy gained the most from the recent Brexit optimism. The FTSE 250 Index rallied 1.8% this quarter and Vanguard Asset Management’s exchange-traded fund linked to the index saw record inflows.

Yet, some investors are looking beyond the short-term picture. While allocations to U.K. equities have picked up amid easing Brexit concerns, 21% of global fund managers are still underweight the country’s stocks following years of political turmoil, a Bank of America survey of money managers this month showed. That is down from 32% in the October poll.

“I’d hold off for now on investing until we get clarity on the election,” said Nathan Thooft, head of global asset allocation at Manulife Investment Management, who is underweight U.K. stocks. “Regardless of the outcome of the election, there’s going to be new worries and new anxieties, which might afford you another opportunity to buy at a new point in time.”

The annual pace of economic expansion in the U.K. fell to the lowest in almost a decade last quarter, figures published this week showed. Another report showed that retail sales unexpectedly fell in October, leaving growth over the last three months at its weakest for 1 1/2 years.

“Over the longer term, risks to sterling remain to the downside as uncertainty continues to weigh on the investment and growth, leaving little room for the Bank of England to normalize rates,” said Alberto Gallo, a portfolio manager at Algebris. “We are neutral on the pound but have been biased to lower levels. We remain short credit risk on U.K. firms exposed to the consumer as well as commercial real estate.”

To contact the editors responsible for this story: Paul Dobson at pdobson2@bloomberg.net, Anil Varma, William Shaw