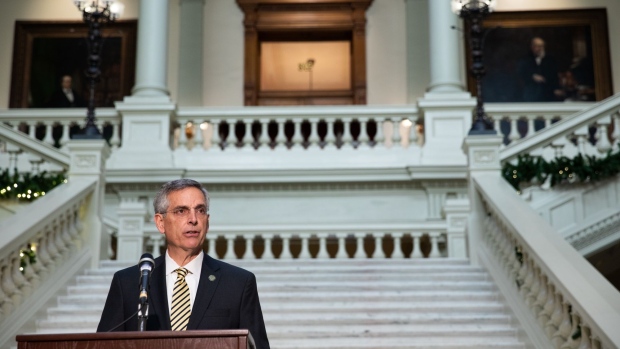 (Bloomberg) -- The once-obscure state-level job of overseeing elections has emerged as a prime target for wealthy donors and national organizers from both parties seeking an edge in the 2022 midterms that could shift control of Congress away from Democrats.

Republicans are backing secretary of state contenders who echo Donald Trump’s false claims that the 2020 election was stolen from him through voter fraud, with donors including Richard Uihlen.

Democrats have also seen an exponential increase in the amount of money they’re raising for the role, which is often sought as a stepping stone to higher statewide office.

Secretaries of state, the officials who control voter registration, ballot counting and election equipment in many states, including some key presidential battlegrounds, were thrust into the center of Trump’s campaign to overturn President Joe Biden’s election victory last November. Trump accused some of them of allowing cheating, particularly Georgia’s Brad Raffensperger, who took his dispute with Trump public.

The heavy political focus on what is designed as a bureaucratic job administering elections could undermine the credibility of the electoral system, said Martha Kropf, a professor of political science and public administration at the University of North Carolina at Charlotte.

“The more you make the secretary of state office political,” she said, “that starts to be a problem for democracy.”

Donors like Uihlein, the co-founder and chief executive officer of office supply company Uline Inc, have pumped thousands of dollars into the race in Georgia, where Trump focused some of his rage after Biden became the first Democrat to carry the state since 1992.

Among Democrats, groups like End Citizens United/Let America Vote, who have worked to counter Republican efforts to tighten voting laws, announced it would spend $7 million on secretary of state and attorney general campaigns. The Democratic Association of Secretaries of State has raised $1.1 million in the first half of 2021, a five-fold increase over the same period two years ago, including $250,000 checks from Arthur Blank, the Home Depot co-founder, and philanthropist Quinn Delaney.

Trump has endorsed primary candidates in three secretary of state races, a highly unusual move from a former president.

“Good luck Kristina, and while you’re at it, check out the Fake Election results that took place in the city of Detroit,” he added.

On Monday, he endorsed Arizona state Representative Mark Finchem, who repeated conspiracy theories about the 2020 election and was one of the legislature’s strongest proponents for a controversial audit in Maricopa County.

Uihlein gave Hice $7,000, the biggest donation allowed under Georgia law. The leadership political action committee of Representative Adam Kinzinger of Illinois, one of the 10 Republican House members who voted to impeach Trump in the wake of the Jan. 6 riot at the Capitol, gave Raffensperger $5,000.

The Republican State Leadership Committee, which also supports candidates in other state races, raised $10.2 million, including $500,000 from Citadel’s Kenneth Griffin. The committee’s fundraising was up more than $2 million from two years ago.

Those amounts pale in comparison to what is spent on national campaigns, but it is a lot for second-tier state offices. For example, the Secretaries of State Project, formed in the wake of the 2004 election by activists who blamed Democratic presidential nominee John Kerry’s loss on restrictive ballot access rules in some states, raised about $730,000 over the six years it was active.

Colorado Secretary of State Jena Griswold, chair of the Democratic Association of Secretaries of State, said voters see secretaries of state “at the forefront of protecting American democracy.”

In Arizona, attacks from Trump and the Republican-led audit of the vote in Maricopa helped Secretary of State Katie Hobbs, a Democrat, ascend to the national stage. Now she is the front-runner in the Democratic gubernatorial primary.

Secretaries of state have a mixed record of going on to higher office, in part because of the uneasy relationship between partisanship and managing elections fairly.

Former Florida Secretary of State Katherine Harris, who was at the center of the nail-biting 2000 presidential election recount between Democrat Al Gore and Republican George W. Bush, lost a 2006 Senate race in the state. Former Ohio Secretary of State Ken Blackwell, whose handling of the 2004 election was questioned by Democrats, went on to lose the 2006 race for governor. And former Kentucky Secretary of State Alison Lundergan Grimes lost a high-profile 2014 race to Senate Minority Leader Mitch McConnell.

One exception is Georgia Governor Brian Kemp, who was criticized for continuing to campaign for his current position while holding the office of secretary of state.

Stan Barnes, a Republican political consultant in Arizona, said that the post-election turmoil bolstered Hobbs’s profile there and might help her win the Democratic gubernatorial primary, but it would also all-but ensure that Trump and the 2020 race are top issues in the general election.

“It’s really an open question as to whether or not that benefits her in a general election against a Republican opponent,” he said.