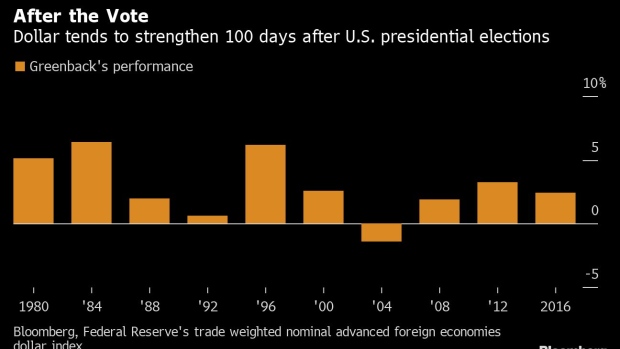 A voter casts a ballot at a polling location in Brooklyn borough of New York, U.S., on Tuesday, June 23, 2020. An anticipated surge of absentee voting has been driven by concerns about casting ballots in person while the coronavirus is still circulating with statewide requests for mail-in ballots at seven times the number from four years ago. Photographer: Victor J. Blue/Bloomberg , Bloomberg

(Bloomberg) -- For all the forecasts about dollar weakness, history shows that the greenback is poised to appreciate after November’s presidential election -- regardless of who wins.

The dollar strengthened in the 100 trading days after nine of the past 10 elections from 1980 to 2016, according to Richard Falkenhall, a senior foreign-exchange strategist at SEB AB in Stockholm. The currency performed better following Democratic wins, rising an average 4% after these votes versus about 2% when Republicans prevailed, he said, noting that the 1984 and 2008 votes were excluded from this calculation due to outsized drivers beyond the election.

The findings “suggest that Joe Biden being elected for president would be the best possible outcome” for the dollar, he wrote in a note Monday. “It would then be a Democrat candidate winning his first term, both being positive factors for the USD in the past.”

The greenback has defied naysayers this year, up 3% even as prognosticators forecast the currency will peak in the third quarter and weaken through 2021. A stream of bad news continues to undercut the dollar bears: coronavirus cases globally have exceeded 10 million, governments are battling the worst economic downturn in recent history and protests over racial injustice continue across the U.S., boosting haven demand.

Meanwhile, recent polls show the Democratic nominee Biden leading President Donald Trump, capturing the support of 50% of registered voters versus 40.4% for the president.

Of course, not all gauges of the dollar suggest strength is inevitable. While Falkenhall looked at a trade-weighted measure of the dollar against seven economies, a narrower index run by the Intercontinental Exchange Inc. shows less historical agreement on the dollar’s direction after elections.

The dollar data “offers a taste” of what to expect later this year in the election cycle, Falkenhall wrote.