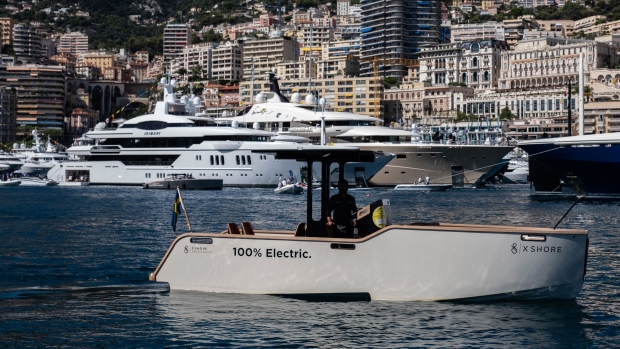 (Bloomberg) -- The auto industry is already shifting to go electric. A Swedish startup is convinced that boats are next.

Stockholm-based X Shore raised 15 million euros ($18 million) from investors to scale up production of its battery-powered leisure boat to tap into the growing market for environmentally friendly luxury marine rides.

The company’s Eelex 8000 -- a 26-foot vessel powered by a 120 kilowatt-hour battery -- went on sale in the U.S. last month, but X Shore is struggling to fill ballooning orders from its small Stockholm factory. The startup plans to use the funding to open a second site and increase production to about 400 boats a year, Chief Executive Officer Jenny Keisu said in an interview.

“What is happening now in the boating market is what has already started in the car industry,” Keisu said. “We have more demand than we can supply and that’s why we are raising capital.”

While the market for electric leisure boats remains small -- some 15,000 vessels were sold last year -- it’s expected to increase to 70,000 shipments and a total size of $1.4 billion by the end of this decade, according to researcher IDTechEx.

Growth is “slow and steady,” and driven mainly by technology improvements and environmental enthusiasts, according to the firm’s senior technology analyst Luke Gear. It’s held back because the emissions rules and purchasing subsidies that have helped drive electric-car sales aren’t yet matched for the ship industry, he said.

That may be about to change. Cities including Amsterdam and Venice have moved to ban or limit the use of gas and diesel-powered boats. Norway, a global leader in adopting electric cars, in February reaffirmed plans to ban emissions from vessels in certain fjords by 2026. Keisu said X Shore has been inundated with calls from Norwegian salmon farmers since.

“It’s hard to say how big this market will become since it’s growing so fast and is driven by regulation,” she said. “It’s only fairly recently that there has been a better understanding of how much emissions leisure boats produce.”

While most electric leisure boats are small and lack power, her company is targeting buyers who are willing to dish out for vessels with a performance that’s on par with models running on fossil fuels. The Eelex 8000, the company’s only product to date, boasts a top speed of 35 knots and comes with a 24-inch touchscreen and a stereo audio system. It starts at about 250,000 euros.

“Boats are typically the most expensive non-essential purchase that people make,” Keisu said. “As we grow, I’m sure we may offer new models, but we will continue to be in the affordable premium segment.”