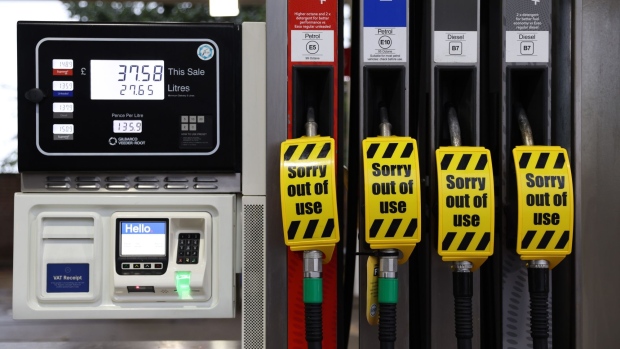 Covers on fuel pumps reading "Sorry out of use" at an Esso petrol station in Brighton, U.K., on Monday, Sept. 27, 2021. The U.K. government took emergency measures late Sunday to try to ease acute fuel shortages across the country, as gasoline retailers shut pumps after days of panic buying. Photographer: Hollie Adams/Bloomberg , Bloomberg

(Bloomberg) -- Britain’s fuel shortage has inflamed interest in electric vehicles, based on the record level of inquiries at one online auto marketplace.

Auto Trader Group Plc said on Monday that dealers received direct inquiries for electric cars every 1.8 minutes this past weekend, almost twice the average pace in August. Total EV queries jumped 36% from the weekend before.

Views of advertisements for new and used electric vehicles, meantime, rose by 28% and 61%, respectively, on Auto Trader. EVs made up four of the top five new cars in terms of ad views, with Hyundai’s Ioniq 5 and Ford’s Mustang Mach-E leading the pack.

The spike “suggests that people aren’t simply flirting with the idea of electric but have been encouraged to actively pursue a purchase,” said Ian Plummer, Auto Trader’s commercial director. Dealers with electric cars in stock are likely to do “particularly well” this week, he added.

In an analysis of Google search data, Carguide.co.uk found that online searches for electric cars in the U.K. rose by 1,600% on Sept. 24 -- the date when fuel shortages became widespread across the country.