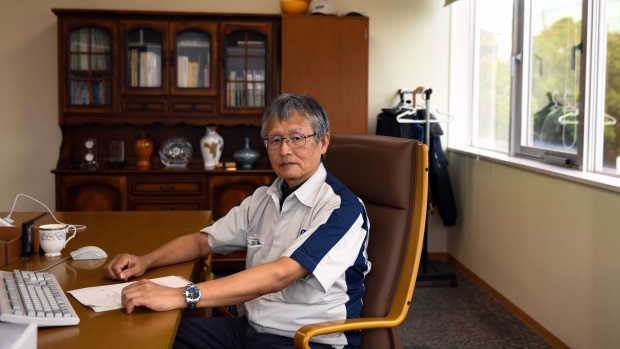 A lunch room inside Hamamatsu Gasket, a maker of cylinder-head gaskets. , Bloomberg

(Bloomberg) -- Fuji Oozx Inc. is one of hundreds of automotive-parts suppliers in Japan whose very existence is being threatened by the world’s shift toward electric vehicles.

For almost 70 years, the company has been making intake valves, an essential component of any gasoline car that controls the flow of gas in and out of an engine’s cylinder. Typically made of copper, they’re light and highly heat resistant and use a decades-old technology that’s not needed in any electric car.

“We have to start looking for a new business,” President Satoshi Tsujimoto, 63, said from his office adjacent to Fuji Oozx’s factory in Shizuoka prefecture, an elongated region that traces the coast of the Pacific Ocean. Fuji Oozx supplies automakers including Toyota Motor Corp. and Nissan Motor Co.

Valves for boat engines are one option but the Tokyo-listed company’s board is also looking further afield, like branching into medical devices. “We have no choice but to fight for survival. We’ll have to find an answer in the next decade.”

Tsujimoto’s predicament is one that other suppliers of traditional auto parts around the world are confronting as the industry accelerates its pivot away from the combustion engine. They either make the shift too, or find completely new avenues of business. The situation is particularly acute in Japan, where the government has pledged to go carbon neutral by 2050. A key part of that will be transitioning to cleaner cars, which currently only make up about 1% of vehicles, compared with 30% in parts of China, the global EV trailblazer.

Management consulting firm Arthur D. Little predicts that as many as 300,000 jobs may disappear in Japan if the automotive sector makes a full shift to EVs, equal to about 10% of all current jobs in the industry. In the U.S., it’s estimated some 75,000 jobs could be lost if battery electric vehicles make up around 50% of domestic auto sales by 2030.

Shizuoka is home to a myriad of auto-parts suppliers that count some of the industry’s biggest names as clients. It’s one of Japan’s key hubs for combustion-engine car-part manufacturers, accounting for more than half the prefecture’s supply chain in 2018, figures from the Shizuoka Economic Research Institute show.

After World War II, Shizuoka flourished. By the 1960s, the coastal city of Hamamatsu, the birthplace of legendary motorcycle firms Yamaha Motor Co., Honda Motor Co. and Suzuki Motor Corp. (there’s a car and motorcycle theme park there to this day), was churning out the most two-wheelers anywhere in the world.

Motorcycle output peaked in the early 1980s but Hamamatsu embraced gasoline cars. A decade ago, the city had an estimated 2,000 auto-parts makers supporting almost 100,000 jobs. As Hamamatsu’s two other major sectors -- textiles and musical instruments -- declined as cheaper manufacturing hubs popped up elsewhere in Asia, auto suppliers held their ground.

Now, it’s hard to see how they can hold back the rising electric-car tide much longer.

Honda has said it won’t sell combustion-engine cars beyond 2040 and has urged suppliers to get on board. Even Toyota, something of a laggard when it comes to going all electric, rolled out a new battery-electric-vehicle series, Toyota bZ, in April as it works to eventually establish a full lineup of EVs, which would include hybrids and fuel-cell cars, starting with 70 models by 2025.

Conventional cars have around 30,000 parts, far more than electric ones, which can run without engine blocks, fuel pumps or mufflers. There’s competition also from China, where small, cheap electric cars are being mass produced in their thousands.

Read more: China’s Electric Car Capital Has Lessons for the Rest of World

Authorities in Shizuoka are cognizant of the coming revolution. In 2018, they set up a next-generation car institute to help parts makers develop new EV components. The body gets funding from Japan’s Ministry of Economy, Trade and Industry to assist businesses with the transition.

“We’ve felt this sense of crisis well before Japan’s carbon-neutral announcement,” said Eiji Mochizuki, the research institute’s head. But while larger suppliers are making plans to adapt, smaller ones are still sleeping, he said. “We’re trying to wake them up.”

That may be easier said than done. Many smaller suppliers are already surviving on razor-thin margins, a function of the tactics employed by powerful buyers like Toyota who often pit parts makers against each other and select the one that can make widgets the cheapest. Spare cash to expand into another area doesn’t exist.

“Honestly, it’ll be hard to survive,” said Masakatsu Suzuki, the 56-year-old owner of Masa Engineer, a small business that makes equipment to assemble and check auto parts. “I wish I could actively make a move.”

Suzuki has been in business for about 25 years. He worries about how he’ll pay his four workers as EVs become more popular; automobiles he likens to cheap panda cars at amusement parks -- “all you need is a battery, a steering wheel and a chair.”

Others simply don’t see EVs as an immediate threat.

Yaichi Sakai runs Hamamatsu Gasket, a family business passed down by his father. Among other things, the 67-year-old company makes cylinder-head gaskets, which provide the seal between an engine block and cylinder head that prevents coolant or engine oil leaking into the cylinders. Although cylinder-head gaskets aren’t needed in EVs, other sorts of seals are to shield an electric car’s motor from dust and water.

“I don’t have a sense of crisis now because gas-powered cars aren’t going to be zero immediately,” Sakai said. He estimates about 20% of Hamamatsu Gasket’s products won’t be necessary in an EV era but says sticking to parts for engines is still more profitable in the short term.

“Small companies like us don’t have the financial strength,” said Sakai, who dropped out of high school to learn the trade. “We just have to focus on the task in front of us.”