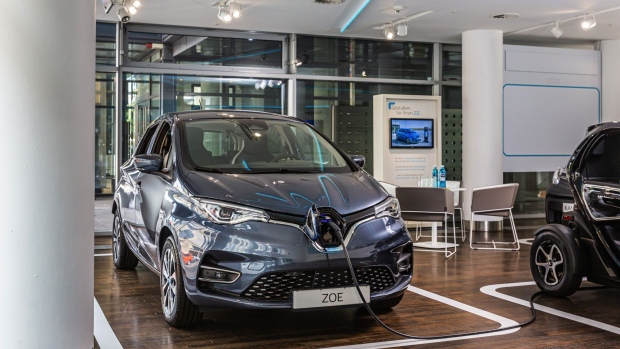 Hybrid and electric-car registrations soared in Europe last month, seizing a record share of the market and lifting total sales to the highest in 10 months.

Registrations of plug-in hybrids more than quadrupled, while battery-electric vehicles more than doubled, according to auto-market researcher Jato Dynamics. Total sales slipped just 4% from a year ago to 1.28 million, the most since September.

“If the current situation continues to improve, we could start to talk about a ‘V’ shaped recovery in the European car industry,” Felipe Munoz, a global analyst for Jato Dynamics, wrote in a report Thursday. EV demand is rising because of a wider selection of more affordable models and increased competition that is pushing down prices.

The figures are the most positive yet for an industry that had expected Europe to continue lagging the recoveries other regions have mustered following the coronavirus pandemic. Auto sales fell less drastically in the U.S. and have started growing again in China.

Government subsidies in countries including Germany and France have kick-started sales, especially for electrified models. Hybrid, plug-in hybrid and battery-only vehicles were 18% of registrations last month, up from 7.5% a year ago. Four of the five best-selling hybrids were Toyota Motor Corp. models, while Renault SA’s Zoe dominated the electric segment.

Tesla Inc. missed out on the trend, with registrations plunging 76% to just over 1,000 units, Jato said.

“Tesla is losing ground this year in Europe,” Munoz said. “Some of this can be explained by issues relating to the production continuity in California, but also by high competition from brands that play as locals in Europe.”

There were 10 more battery-electric cars on the market last month than a year ago, with new models including the Peugeot 209, Mini Electric, MG ZS, Porsche Taycan and Skoda Citigo buoying the segment.