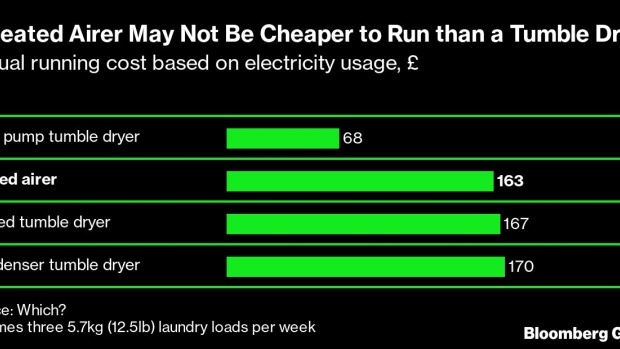 (Bloomberg) -- Charlie Pears doesn’t own a tumble dryer. Last winter, when she and her partner Joe needed to dry laundry, they’d just turn on the heat in their 100-year-old house in northeast England, draping clothes over radiators.

This year is different. Expectations for the UK’s average annual energy bill are hovering around £2,500, over £1,000 more than at this time last year, based on maximum prices per unit of gas and electricity currently set by the government. At those prices, Pears and her partner needed an alternative to firing up the gas boiler for the sake of dry jeans — so they bought a heated clothes airer.

Heated clothes airers, also known as electric drying racks, are becoming a must-have winter item as British consumers look for ways to beat the energy crisis spurred in part by Russia’s invasion of Ukraine. The humble airer joins the ranks of other low-tech warming products in high demand as temperatures start to dip in Europe, a list that also includes electric blankets and firewood.

“When heating is so expensive, you cannot justify putting it on just to dry clothes,” says Pears, 36, who lives in Newcastle, works in marketing and describes her new airer as “smashing.” The £100 ($120) product from department store John Lewis has bars that heat to 50C (122F), and at current energy prices costs around 10p an hour to run. Pears makes it even cheaper by putting the airer on a timer, taking advantage of discounted electricity between 10:30 p.m. and 1:30 a.m.

Lakeland, a UK company known for selling quirky household gadgets, says it pioneered the heated airer in the country, where it has been selling them for 14 years. While they are often at the top of Lakeland’s bestseller list, customer ambassador Wendy Miranda says this year airers have completely sold out many times.

“Since the news started to feature continuously on energy costs, it’s gone through the roof,” she says. “We’re up on heated airers just below 100% year on year, but we are out of stock as often as we are in stock.”

The company even imposed its first-ever two-per-household limit on the product. Miranda says sales are also up for heated throws, air fryers and remoskas, a high-efficiency electric Czech cooking pot.

On the website for John Lewis, where Pears bought her drying rack, searches for airers rose roughly 250% between October and November.

While UK households are on the hunt for ways to keep their utility bills in check — energy consumption dropped 10% in the past two months — increased demand for the once-niche airer is also fueled by a quirk of the way Brits do their laundry. Despite a climate that makes outdoor drying a challenge, British people are far less likely to have a tumble dryer than Americans.

Around 58% of British households own a tumble dryer, compared to over 80% in the US. And those that do often have combined washer-dryers, which are more energy and water-intensive and less effective at drying than standalone machines. Data from market research company Euromonitor shows that just 1.4% of automatic tumble dryers bought in the US last year were combined washer-dryers, compared with 26% in the UK.

“Traditionally, UK consumers didn't perceive a tumble dryer as a necessity,” says Veronika Kandusova, senior analyst at Euromonitor. “Many people don't have a separate utility room in their homes, [and] it's still quite common to have a washing machine in the kitchen or bathroom, for instance. The space for a separate tumble dryer is more limited.”

Individual needs also impact whether an airer will be the cheapest option, a calculus confounded by the lower price of natural gas relative to electricity in the UK, where people largely use gas boilers for domestic heating. Consumer energy costs have been capped by the British government at 34p per kwh of electricity and 10p per kwh of gas until April, a publicly funded subsidy designed to lessen the impact of skyrocketing energy prices.

“It’s only cheaper to use a heated airer if you’re washing small loads, but in almost any other scenario — if you have a family, if you wash lots of sports stuff — then a heated airer isn’t the most cost-efficient option,” says Matt Knight, a product tester at consumer website Which?. The site tested the efficiency of airers for the first time this year in response to requests from members.

Which? found that the cost of running an airer varies from around 7p to around 15p per hour. Drying “pods,” which blow hot air through the clothing rather than heating up bars, are typically more expensive at 30p to 40p per hour, though they also dry clothes in two hours rather than the four-plus it takes using a heated bar airer.

The most efficient dryers tested by Which?, heat pump tumble dryers, cost 46p per load, while condensing and vented tumble dryers cost over £1 per load.

Working out the cost of an hour of heating is even less of an exact science. In theory, a small 24kw boiler, typically used to heat a home with one bathroom, would cost roughly £2.40 per hour to run. In practice, it would likely run for less time — only until the space reached the temperature set by the thermostat — but how much less depends on a home’s insulation level and the efficiency of its boiler.

Using an airer to avoid turning on the heat also has the unfortunate side effect of exacerbating the effects of “under-heating,” says Jenna Willcox, an energy advisor at the Centre for Sustainable Energy, a UK charity. “In any instance, drying your clothes inside is not a great idea because it creates a lot of moisture,” she says. “But if you pair that with under-heating your home, you're producing loads of water vapor inside a really cold house. That's going to potentially cause problems with condensation and mold.”

Placing clothes directly on radiators makes heating less effective and can also contribute to a damp problem, so that isn’t recommended either. Anyone drying laundry indoors should crack a window and use extractor fans to make sure there is proper ventilation.

And while running a heated airer might make one small room a little warmer, it’s no substitute for central heating. Indeed, the biggest argument for opting for heating over a new electric gadget may be the most obvious: It will dry your clothes, but also keep you warm.