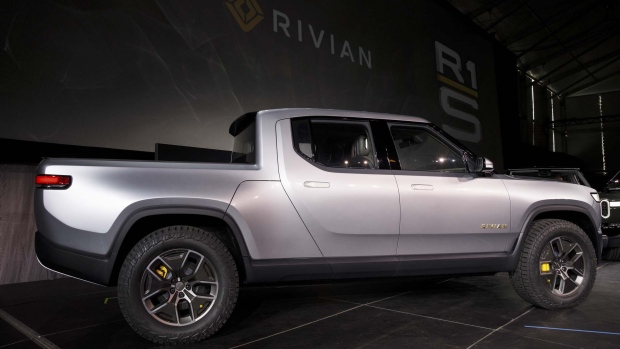 The Rivian R1T electric pickup truck is among a crowd of electric vehicles coming from startups. , Photographer: Patrick T. Fallon/Bloomberg

(Bloomberg) -- Rivian Automotive Inc., the electric-truck maker already backed by Amazon.com Inc. and Ford Motor Co., raised another $1.3 billion from investors led by T. Rowe Price to support the rollout of its debut vehicles next year.

The funds generated from Rivian’s fourth major investment this year boosts the total raised to $2.85 billion. The Plymouth, Michigan-based manufacturer said Amazon, Ford and funds managed by BlackRock also participated in the round.

Rivian’s latest haul comes as the company is drawing significant interest from both consumers and businesses wanting to shift to electric vehicles. Chief Executive Officer R.J. Scaringe has spent the last seven years developing a pickup and sport utility vehicle that will be built off a common architecture that could be used for other models in the future. The platform, which Scaringe prefers to refer to as a “skateboard,” is a big part of his vision to deliver returns to those who’ve backed him.

Several of Rivian’s investors are also its future customers. Amazon has ordered ordered 100,000 electric last-mile delivery vans from the company, while Ford plans to use its skateboard for a new battery-electric vehicle. Rivian is aiming to launch its R1T plug-in pickup and R1S SUV late next year.