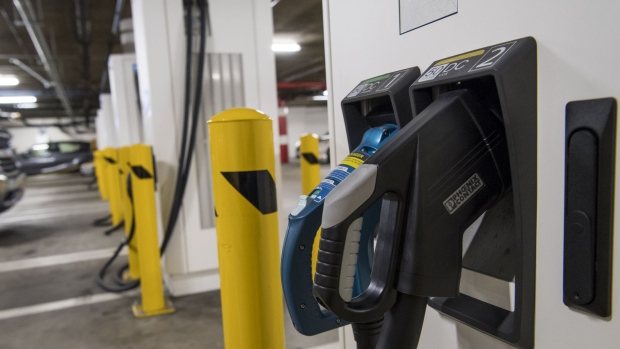 The measure is part of a proposal to set biofuel-blending requirements for gasoline and diesel that is being honed by the administration ahead of a planned mid-November release, said two people familiar with the matter. The EPA is on track to send the draft plan to the White House for interagency review before the end of the week, said the people, who asked not to be named because details aren’t public.

If finalized, the measure could expand Renewable Fuel Standard program benefits to electric vehicle makers such as Tesla Inc. and operators of EV charging networks such as ChargePoint Holdings Inc. as well as producers of biomass, biogas and waste-to-energy electricity. Key details -- including who might qualify for biofuel credits under the shift -- were not immediately available.

Any shift to formally award biofuel compliance credits for EVs charged with renewable power would further bolster the EV industry, coming on top of expanded tax cuts enacted as part of the Inflation Reduction Act. It also would mark a dramatic expansion of the 17-year-old RFS program meant to push more ethanol, biodiesel and other plant-based alternatives into vehicles.

EPA spokesman Timothy Carroll declined to comment on the proposal, but emphasized the agency “intends to meet the deadlines to implement the RFS program.” Under a legal settlement with ethanol advocates, the agency has agreed to propose the next tranche of biofuel quotas by Nov. 16.

Under the program, refiners and fuel importers use tradeable credits -- known as renewable identification numbers, or RINs -- to prove they have satisfied annual quotas for blending biofuels into their products. The draft proposal would create a new category of credits -- dubbed e-RINS -- to cover certain EV charging. The new e-RIN program could begin as early as 2024, one of the people said.

Under the initiative, benefits might initially flow to EVs charged using power generated from biogas or methane harvested at landfills and manure ponds.

The proposal could create new disputes in the already contentious RFS program, as renewable gas producers, charging station owners and automakers vie for the credit value.

Lawmakers have pressured the Biden administration to create e-RINs and approve requests by biogas-to-electricity and biomass energy producers to formally be recognized within the RFS program. Congress included electricity from qualified fuels as part of the RFS when it was expanded in 2007, but EPA is tasked with individually vetting and approving new fuels for participation in the program.

(Updates with further detail on proposal from fifth paragraph)