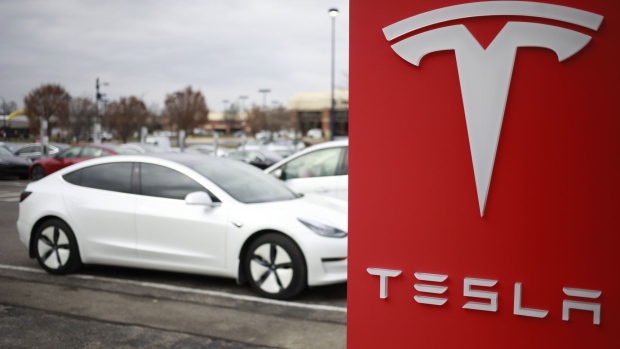 Tesla Inc. signage outside a dealership at the Easton Town Center shopping mall in Columbus, Ohio, U.S., on Friday, Dec. 10, 2021. Prices for popular shopping categories are rising the fastest in decades, putting political and public pressure on the Federal Reserve to curb inflation, not to mention potentially crimping outlays as Americans finish off their holiday shopping list. , Bloomberg

Happy New Year! It’s a great time to shift our mindset when it comes to electric vehicles. In all the years that I’ve covered Tesla, two things have constantly irked me.

The first is the question that I get about how Tesla faces “rising competition” from legacy automakers who are finally coming out with electric vehicles after watching Tesla grind it out — and create a sizable lead — for a full decade. Remember when every new offering was a supposed “Tesla Killer?” LOL.

Well, guess what? Tesla delivered 308,600 electric cars globally in the fourth quarter, which smashed analysts’ expectations by a stunning amount. Bloomberg’s survey of 13 analysts had the figure at 263,000 — so Tesla beat their forecasts by more than 45,000 units.

Do other automakers have EVs on the market? Yes, and massive investments along the lines of what Toyota and Volkswagen have outlined recently are great steps forward. But for now, Tesla maintains a commanding lead when it comes to actual sales; it remains the brand that is synonymous with EVs. It’s also the only company currently manufacturing EVs in high volumes, which is why Hertz ordered 100,000 vehicles from Tesla and not from GM, or Ford, or VW, or Toyota.

That leads to the second question regarding market share. Some people wonder if Tesla will lose market share to other EV makers, as more EVs come on the market. It probably will, even as overall sales continue to grow. I’d like to challenge everyone who reads this column to rethink this framing.

Imagine the auto industry as a pie. Right now, the EV share of the overall pie is a tiny sliver but a growing one. In Norway — a small country, I know — 65 per cent of new car sales in 2021 were electric. On Tesla’s last earnings call, Chief Financial Officer Zachary Kirkhorn said that there’s been a “profound awakening” and desire for EVs that has caught even Tesla off guard. Demand outstrips supply for Tesla and for rivals like Ford.

In the coming year, with fossil fuel-induced climate change ever more evident, how much will the EV sliver of pie grow? My colleagues at BNEF expect EV sales to continue to pick up pace in 2022 as production capacity expands and new models launch.

If you are planning to buy a new car, the first decision you make is this one: will you get another gas-powered car, or will you consider an EV? And if you decide to get an EV, which one? And from there: What is most important to you: cost? Battery range? The ability to easily charge? The real competition is between EVs and internal combustion engine vehicles, not EVs versus EVs.

A former Tesla salesperson who shall remain nameless explained that when the Mac maker first entered the smartphone market, its competition came from traditional cell phone companies, as Tesla’s competition comes from more established ICE manufacturers. Other companies soon developed rival smartphones, but Apple’s lead in the market came from people who were persuaded to make the switch. Similarly, more consumers are making the switch from ICE vehicles to EVs.That’s a good way to think about it, though I do like my pie metaphor. It’s worth noting that Apple briefly hit a US$3 trillion valuation this week, while Tesla’s is around US$1.15 trillion.