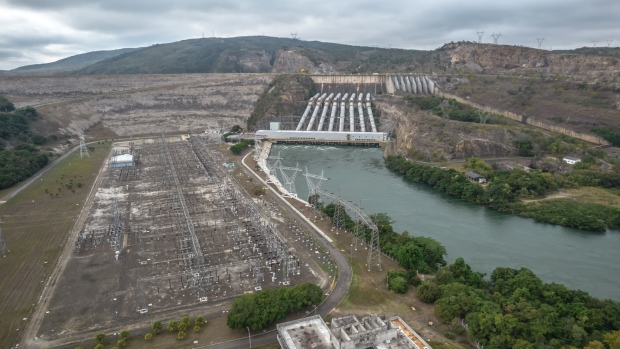 The Centrais Eletricas Brasileiras SA (Eletrobras) Furnas hydroelectric dam during a drought in Furnas, Minas Gerais state, Brazil, on Tuesday, June 29, 2021. Brazil issued a provisional measure to authorize exceptional and temporary efforts to optimize the use of hydro-energy resources and secure energy supply as Brazil faces one of its worst water crisis. , Bloomberg

(Bloomberg) -- Investors have signaled early interest in scooping up about 13 billion reais ($2.7 billion) in shares of Brazilian power generation giant Eletrobras, in what’s expected to be one of the country’s largest equity offerings on record, according to people familiar with the matter.

The transaction is poised to formally launch in coming days, but banks already have started reaching out to potential buyers for what’s likely to become a much larger deal, the people said, asking not to be named discussing the confidential process. A successful offering would privatize the government-controlled utility, formally known as Centrais Eletricas Brasileiras SA.

The share sale may ultimately raise a total of around 30 billion reais, with both the issuance of new stock and the sale of some shares owned by the government, analysts at UBS BB Investment Bank wrote in a report May 22. With the capital increase, the government’s stake is expected to be diluted to less than 50% of voting shares, though authorities would retain some veto rights.

The sale, which had to be cleared by the nation’s audit court and lawmakers, would come amid a sharp slowdown in Brazilian share offerings this year, as surging interest rates and anticipation of election volatility curb appetite for deals.