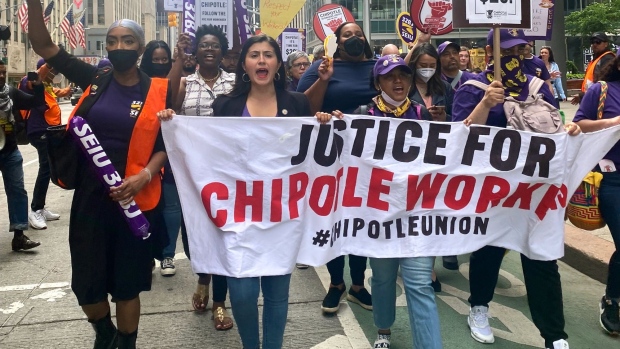 Demonstrators during a rally in New York on May, 26, 2022. , Photographer: Carly Wanna/Bloomberg

Manny Pastreich, secretary treasurer of the union, said the action marks the first sustained attempt to organize Chipotle workers in the U.S. The effort comes amid a wave of unionization efforts at companies like Starbucks Corp. and Amazon Inc.

“They don’t pay enough,” Pastreich said. “People are working in conditions that aren’t safe,” adding that workers have complained of health and safety violations pertaining to the food as well as rats in buildings.

A representative at Chipotle did not respond to a request for comment.

The action ended close to 4:30 p.m., when 11 individuals, some of whom were Chipotle employees, were arrested for blocking the intersection of 56th St. and 6th Ave, according to Rush Perez, a communications representative for the union.

The New York Police Department could not confirm that number at the time of publication.

Workers from more than a dozen Chipotle locations in the city have gone on strike this week, refusing to show up for shifts in protest of what they allege are harmful workplace conditions.

Maria Romero, a 24 year-old cashier, skipped her shift. She came to the rally to call for better benefits and higher pay. Currently, she makes $17.50 per hour. “It’s an expensive city,” said Romero, who has worked at a Chipotle on the Upper East Side for 6 years. “I have a family.”

The Newport Beach, California-based burrito seller has faced criticisms for worker violations in the past. In April of 2021, New York City sued the company for what it alleged were violations of the city’s Fair Workweek Law, which requires predicable schedules and full-time work. According to the complaint, the company owes workers more than $150 million in relief.

Workers across the country have been pushing for better conditions and higher wages. Over the past several months, a growing number of Starbucks locations have voted to unionize. Amazon.com Inc. employees in New York recently voted to join a labor union, making them the first in the company’s US operations to do so.

Last May, Chipotle raised its average hourly wage to $15 an hour, with individual starting wages ranging from $11 to $18. The increase came amid a hiring crunch that left the chain short of 20,000 staffers across the US.

Alyssa Roman wants Chipotle workers to form a union, in part, to help young workers learn their rights as employees. The 21 year-old, who is pregnant, said a union could protect her and her fellow workers.

“I’m not disposable,” she said. “And neither is my labor.”