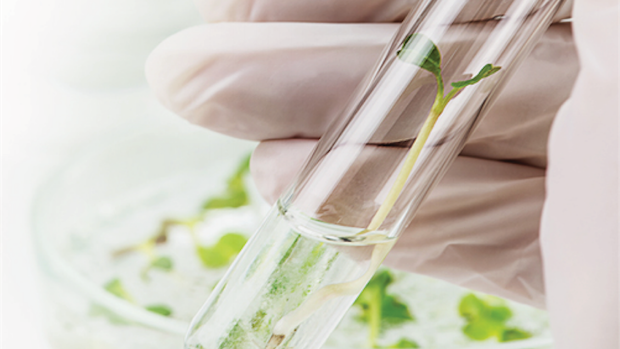 MustGrow's results from trials on fruit and vegetables bode well for potential use on cannabis. , Image courtesy of Market One Media

The human population is growing, which means that natural resources are relied on more than ever before to sustain life. The need to feed over seven billion people on this planet has created a reason to grow as much crop as possible, without disease or pest interference, which is where pesticides first came into play. However, the world is now starting to understand the negative consequences of pesticides and how harmful they can be.

Pesticides are a double-edged sword with a long and spotted history. While they are an essential way to eliminate unwanted pests from otherwise healthy crops, they have shown to be toxic as well, especially to humans. According to the World Health Organization, pesticides may cause “adverse health effects including cancer, effects on reproduction, immune or nervous systems.”

The need for more natural, non-synthetic pesticides is what the agricultural market needs. This is especially true when it comes to the cannabis industry, whereby the exponential growth of production, but absence of an effective pesticide, has led to hundreds of millions of dollars of lost product. This underserved market is in desperate need of a solution that prevents product loss.

So far, the main problem with adequate and safe pest control has been efficacy. Natural alternatives have historically been less efficacious than their synthetic counterparts as they generally focus on suppression rather than control. The result is that most of the effort is directed towards treating symptoms of pests and diseases, rather than eliminating or preventing them from the beginning.

“In our trials, we are seeing 100 per cent effectiveness at removing soil-borne diseases that can affect cannabis crop growth. This is a very exciting area of focus for us.”

It all starts with mustard seed

With the market begging for an effective, natural solution to this persistent and harmful problem, one company has stepped forward with a very promising suite of biopesticides to fill the void.

The company’s suite of biopesticides have shown to be remarkably effective for removing soil-borne pests and diseases, and they are natural. While the company is primarily focused on helping cannabis growers, their technology has also shown to be extremely useful for all kinds of crops, including fruits, vegetables, tobacco, ornamentals, and turf.

The company’s patented products are derived from mustard seed, which comes from the brassica family of plants (cabbage, kale, turnip, mustard, etc.). These plants contain natural compounds that, with water, form a natural chemical, Allyl Isothiocyanate (AITC), that fights pests and diseases. MustGrow has developed a proprietary method for isolating these natural compounds found within the mustard seed and has put it in a form suitable for commercial agriculture use.

Over 110 independent third-party field trials of the natural technology have also shown great potential to control nematodes and soil-borne diseases including Botrytis, Fusarium and Pythium with the efficacy of a synthetic chemical. This gives MustGrow a significant efficacy advantage over other natural technologies.

Now, the company is taking its innovations a step further by focusing on the cannabis industry, and in addition, in-licensing a suite of biologic products specifically for cannabis applications, which includes a biofungicide and a biofertility product.

According to MustGrow’s COO Colin Bletsky, the company has identified numerous cannabis growers who are dealing with similar disease issues to that in fruits and vegetables, which is impacting their cannabis crops. Using MustGrow’s technology, the company believes that cannabis growers can benefit from its proprietary biopesticide, which will allow them to start with clean soil for planting.

Bletsky explains, “In our trials, we are seeing 100 per cent effectiveness at removing soil-borne diseases that can affect cannabis crop. This is a very exciting area of focus for us. People are going to be skeptical, but we can prove that it works.”

As outlined in the company’s press release from October 3rd, the company has exclusive distribution rights of a biofertility product called TP-1000, which improves nutrient growth and flowering for plants, including cannabis. TP-1000 has been shown in independent trials to increase yield in cannabis production by 4.6 per cent and terepene levels by over 20 percent

Moreover, MustGrow is poised to market its star product, CannaProtector®, to control soil-borne pests and diseases that hamper cannabis production. The product is already approved for use in fruit and vegetable farming as a biopesticide and biofertilizer in Canada as well as the majority of U.S. states. It works by preparing the soil before planting to prevent the formation and growth of pests.

Another product called CannaVate® is aiming to become re-registered in Canada under a Supply and Private Label Agreement. The active ingredient in CannaVate® is Streptomyces Lydicus, which acts as a fungicide and is particularly effective against powdery mildew. CannaVate® intends to address a gap in the market as current chemical fungicides effective against powdery mildew are deemed to be unsafe for cannabis cultivation and are prohibited in Canada. This causes problems as cannabis plants affected by powdery mildew cannot be approved for sale and consumption. As a result, the disease significantly decreases crop yield.

The company’s technology comes at an important time for the industry, as earlier this year, one of Nova Scotia’s largest licensed suppliers of medical cannabis was hit with a class-action lawsuit that alleged the company sold tainted products in 2016, wherein they later had to issue significant recalls.

To prevent similar instances from happening, MustGrow is working on a two-pronged attack

on the pests and diseases that afflict both the soil and actual plants in cannabis crops, providing insurance to growers against costly infestations.

“The biggest challenge facing the cannabis industry is the fact that growers have limited natural products that they can use, and many don’t work,” says Bletsky. “Our technology is natural and could potentially be used as a pre-plant soil treatment to fend of many pests and diseases that are entering the greenhouse. The biofungicide product that we recently in-licensed had been used in the past by cannabis producers as a foliar application to help treat powdery mildew.”

What investors can look forward to

All cannabis crops demand a practical – yet safe – solution to treating soil-borne diseases and other diseases that significantly compromise grower profits.

At a time when synthetic products are under increasing scrutiny with heavy restrictions, the time is now for MustGrow to introduce its natural solutions for the agricultural industry’s most significant problem.

When it comes to the company’s PMRA and EPA registration with their granule product for fruits and vegetables, MustGrow will need to add cannabis to all of its labels. Building off the existing registration should reduce the approval time by approximately two years, which is welcoming news as standard registrations can take up to three to five years in North America, and five to seven years in the European Union and other parts of the world.

With many projects and developments underway, investors have much to look forward to when it comes to MustGrow’s growth potential. The horizon looks bright for this company as they work to eliminate harmful pesticide use while protecting billions of worldwide crop value.