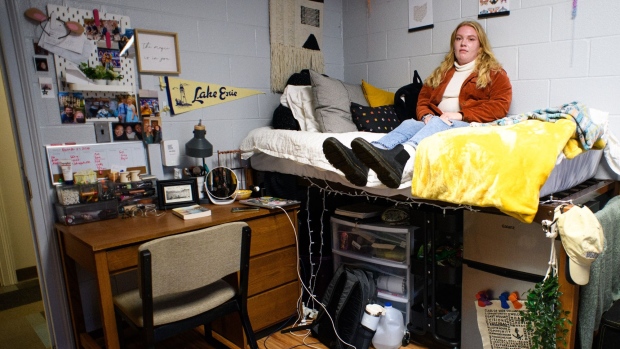 Jorie Fawcett in her dorm room at Vanderbilt University. , Bloomberg

(Bloomberg) -- Even at Harvard, the SAT — that standard for US college admissions and stuff of high-schooler nightmares — is now said to be “optional.” Which choice best describes what today’s anxious applicant should do?

A) Skip the test and gleefully break No. 2 pencils

C) Prep, test and re-test to bump up meh scores

The correct answer, maddeningly, depends on the applicant and, more maddeningly, on which college whisperer you talk to.

As deadlines loom for the Class of 2027 — Jan. 1 is the big day at many top institutions — American higher ed is in the middle of a grand experiment in “test-optional” admissions. Many kids (and their parents) are struggling to make sense of it all, admissions officers say.

Fact is, the SAT and its sibling, the ACT, have been falling out of favor for a while. Studies have shown that White and Asian-American students, and wealthier ones, tend to score higher on the standardized tests than other cohorts. Colleges have been trying to level the field to attract diverse students. Common Application, the nonprofit behind the standardized application form, recently revealed data showing that 48% of students who applied early to college this fall submitted test scores.

But the pandemic drastically accelerated the “optional” trend by disrupting testing. When Covid struck, about half of all US colleges had already gone test-optional. Today, roughly 80% have, according to data from FairTest, an education-focused nonprofit that has long advocated against testing requirements. California’s 295,000-student university system, which includes “public Ivies” Berkeley and UCLA, has ditched the tests altogether. Even numbers-loving MIT made scores optional before requiring them again this year.

Now, with the Supreme Court poised to rule whether race-conscious admissions programs are unlawful, standardized tests — and their effect on equality and education — are on many bright, young minds. A lot of high school overachievers want to know: Just how optional is “test-optional” — and how does any of this affect my chances?

Does an A-student at, say, Phillips Exeter Academy, a $61,000-a-year prep school in New Hampshire, hurt her Ivy League chances by not submitting scores?

Probably, according to admissions consultants. That’s because top students at the best private and public secondary schools — and most kids who apply to elite colleges, period — still tend to submit scores.

Predictably, members of the vast college-admissions-industrial complex say that’s precisely what eager applicants should do.

“Millions of students are choosing to take our exam because they recognize its value,” says David Coleman, who runs the 122-year-old College Board, overlord of the SAT. “In a test-optional world, students still want the opportunity to take an exam and show their best work.”

Janet Godwin, his counterpart at the ACT, says: “Objective information like an ACT score that’s been benchmarked across college readiness indicators and core academic skills is still very important information for an institution to best serve a student.”

Not everyone is so sure.

Jorie Fawcett had a high school resume that seemed to scream elite university: 4.0 GPA, class president, editor of the student newspaper. The big flaw? A meager 25 out of a possible 36 on the ACT. Half of Vanderbilt’s admitted applicants have an ACT score of 34 or 35, according to US News & World Report.

But Fawcett did have a story to tell. She grew up in modest surroundings in rural Ohio. Her parents didn’t go to college. To help out, she worked about 40 hours a week at a supermarket.

She got into prestigious Vanderbilt University in Nashville, Tennessee — without submitting her ACT results.

“I don’t think I would’ve gotten into Vanderbilt if I had submitted that test score,” says Fawcett, now a sophomore majoring in sociology and education. The number, she says, simply didn’t reflect her hard work and potential.

Rest assured, many kids are still sending in scores. Small, distinguished Bowdoin took the test-optional route back in 1969. Today, about half of all applicants still submit results.

Claudia Marroquin, dean of admissions, says many people think going test-optional is a quick and easy way to improve diversity. It can help, yes, she says — but it’s no silver bullet.

“It takes a lot of work in an admissions office to train and to think really critically about how applications are being reviewed because there are inequities in every single part of this process that test scores alone will not solve,” Marroquin says. “It’s one step in that direction.”

Administrators tend to agree that going test-optional has encouraged kids like Fawcett to reach for top schools.

At Cornell, applications are up about 40% since the university in Ithaca, New York made the tests optional during the pandemic. The biggest increase has come from first-generation college students, according to Jonathan Burdick, vice provost for enrollment.

Burdick says that at Cornell, “optional” really does mean optional. Many applicants, however, don’t see it that way.

The story is similar at the University of Pennsylvania, another Ivy League school. Applications are up about 30%, especially from first-generation students, international students and students of color, says Dean of Admissions Whitney Soule. Penn is gathering data to assess how going test-optional has affected its admissions process, she says.

The test-prep industry has a ready answer for all of that: Why risk your shot at Stanford or Yale?

Bright, ambitious kids are “still trying to get a really good score because if they get a good score, they can still differentiate themselves, right?” says Brandon Busteed, chief partnership officer at test-prep-giant Kaplan.

“The reality is, the only way you’re going to get into one of those schools without submitting an SAT or an ACT is if you have some really stellar evidence outside of that,” Khan says.

Nonsense, says Bob Schaeffer, public education director of FairTest. He says the admissions industry is “trying to scare the crap out of kids.”

Like other major shifts in higher education, the move toward making scores optional — or eliminating them entirely — is going to take some getting used to, Schaeffer says.

In the meantime, many students clearly aren’t taking chances.

Case in point: During the first nine months of this year, sales at Princeton Review, another big test-prep company, eclipsed sales for all of pre-pandemic 2019, according to CEO Joshua Park.

“There is still this public disbelief that ‘test-optional’ really means test-optional,” says Angel B. Perez, the CEO of the National Association for College Admission Counseling. “Standardized testing is so deeply woven into the fabric of American society.”