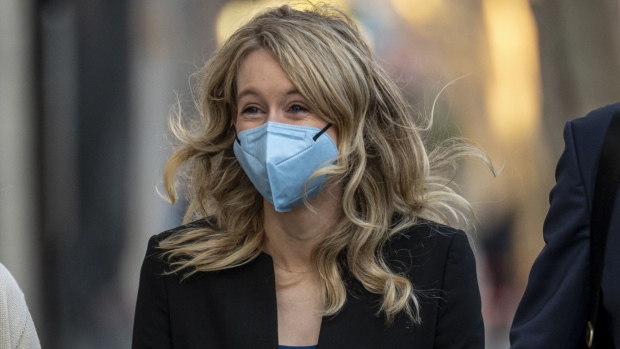 For six days on the stand as the ultimate witness at her own criminal trial, Elizabeth Holmes deflected blame, regretted mistakes and lamented that she suffered years of abuse at the hands of her second-in-command at Theranos Inc. who was also her boyfriend.

The 37-year-old entrepreneur will soon learn whether her bold gambit to address the jury in person keeps her out of prison.

As Holmes reached the final stage of testifying Tuesday, a federal prosecutor continued to chip at her credibility, while she alternated between making uncomfortable admissions, failing to recall certain events and denying others.

When her lawyer got a chance to change the subject, Holmes returned to the earlier defense theme of blaming others. She took particular aim at Theranos President Ramesh “Sunny” Balwani, her former romantic partner, for the rosy forecasts about the company’s financial prospects and its blood-testing technology that are the basis of the fraud charges against the pair.

Until a federal audit in 2015 revealed serious problems with the Theranos lab operations -- including that they posed a danger to patients relying on the blood tests -- Balwani had insisted the Theranos lab “was one of the best labs in the world,” she testified.

The key issue in the case remains whether Holmes intended to mislead investors and patients while raising hundreds of millions of dollars for Theranos before media and regulatory scrutiny drove it into ruin by 2018.

The government claims the startup was built on lie after lie, while the defense argues Holmes was doing her best to make the business succeed and wasn’t trying to deceive anyone about its prospects.

In the cross-examination of Holmes that began last week and continued Tuesday, the government pressed her on two of its most damning allegations -- that she falsely boasted Theranos machines were used by the U.S. military and forged pharmaceutical company reports. Prosecutor Bob Leach made a special point of distancing Balwani from those actions.

Holmes had admitted on Nov. 30 that she’d applied the logos of Pfizer Inc. and Schering-Plough Corp. to the reports without their permission and testified that she wished she’d handled it “differently.” The documents were intended to win over Walgreens as a partner, as well as investors, by suggesting the pharmaceutical giants endorsed the Theranos blood-testing technology.

Leach showed that the deception went deeper. He pointed to other portions of the reports Holmes had edited but had failed to discuss in her earlier testimony, including a “conclusions” paragraph in which she had added that Theranos analyzers give “more accurate and precise results” than competing “gold standard” methods.

“Is making the change to the conclusions paragraph also something that you wish you had done differently?” Leach asked.

“I think this was accurately reflecting the data in the document,” Holmes said. “But yes, I think that the way these reports were communicated, I absolutely wish it had been bolded that they were written by us.”

Holmes is expected to finish a final round of questioning by her lawyer and a prosecutor early Wednesday.

The only mystery remaining in the trial is whether Holmes will call a mental-health expert to the witness stand to bolster her claims that Balwani manipulated her through sexual and emotional abuse. Balwani is set for a separate trial next year over the same fraud charges Holmes faces and he has denied the abuse allegations.

Court filings indicate that the psychologist Holmes has lined up would testify that “intimate partner abuse” by Balwani over a decade-long relationship led her to trust and defer too much to him. In turn, the government might call its own witness to argue against that theory.

“If there is evidence that the abusive relationship caused her to view facts and make decisions through a lens that Sunny created, that gives the defense a clear avenue to cast doubt on whether Elizabeth had the requisite intent to commit the crimes,” said Mark MacDougall, a former federal prosecutor turned criminal defense lawyer.