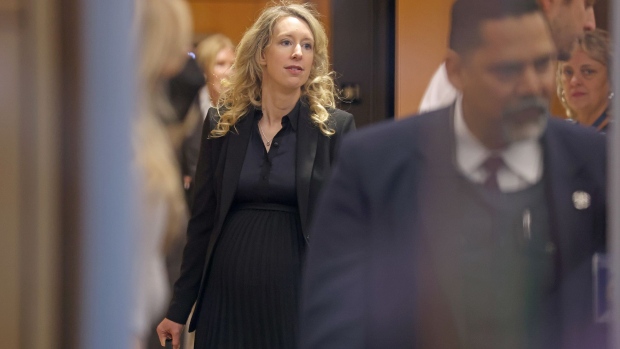 (Bloomberg) -- Theranos Inc. founder Elizabeth Holmes will wake up at 6 am, will have her choice of three subdued colors of clothing, and will be well above the average age of her fellow inmates if she ends up serving her 11 1/4-year prison sentence at a minimum-security women’s facility outside Houston as recommended by her judge.

US District Judge Edward Davila proposed the federal prison camp in Bryan, Texas, according to a court filing. Holmes, 38, has been living in northern California, where she ran her blood-testing startup for almost 15 years before it collapsed and she was indicted in 2018.

“The Court finds that family visitation enhances rehabilitation,” the judge wrote in the filing, which summarized the terms of the sentence Davila imposed on Holmes last week at a hearing in San Jose, California. The final decision on where Holmes is incarcerated rests with the US Bureau of Prisons. Davila ordered her to surrender herself into custody by April 27.

As prisons go, it’s a good draw, said Alan Ellis, a criminal defense lawyer. It’s a standalone facility, he said, while explaining that unlike some other women’s facilities, it doesn’t share any staff or management with a nearby men’s prison. For that reason, staff members don’t suffer from a “prison mentality,” and are more “open-minded,” he said. Ellis said Holmes’s lawyers likely requested the location.

Holmes will face “no walls, no bars, no fences,” Ellis said. “No one wants to get gets kicked out because compared to other places in the prison system, this place is heaven. If you have to go it’s a good place to go.”

Like other federal prison camps, the facility in Bryan has dormitory housing and a low staff-to-inmate ratio and is “work and program oriented,” according to the Bureau of Prisons. Bryan is about 100 miles northwest of Houston.

Legal experts predicted Holmes would likely serve her time at a facility in Dublin, California, about 35 miles east of San Francisco. Court filings indicate that her parents own a condominium in Washington, DC. Holmes grew up in Houston. She and her partner, Billy Evans, have a 16-month old boy and she was visibly pregnant at her sentencing hearing.

According to Pink Lady, a prison consultant company, the Bryan prison camp houses about 900 white-collar, non-violent female inmates, most of them serving time for embezzlement and a variety of frauds. Prison Insight, a website dedicated to exposing what it describes as the “broken” US prison system, says the average age of inmates at Bryan is 32 years. Holmes turns 39 in February.

Holmes was known for a Steve Jobs-like wardrobe of black turtlenecks while she ran Theranos. Civilian clothes are typically forbidden in prison. According to the clothing guidelines in the inmates’ handbook, “only pastel green, gray, and/or white may be sold in institutions for females.”