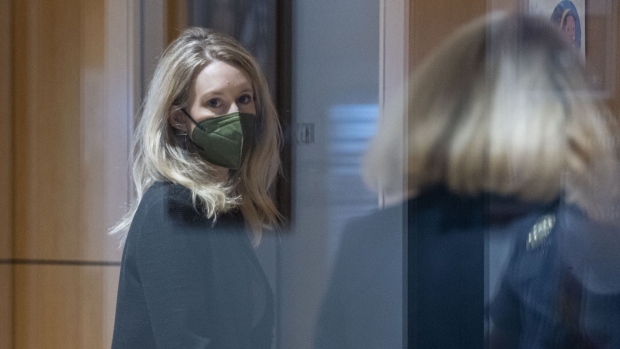 Elizabeth Holmes, founder of Theranos Inc., left, arrives at federal court in San Jose, California, U.S., on Tuesday, Oct. 12, 2021. A lawyer representing Holmes was blocked from taking his best shot at undermining a former Theranos lab director who's been a damning witness at her criminal trial. , Bloomberg

(Bloomberg) -- Yet another juror was dismissed from Theranos Inc. founder Elizabeth Holmes’s criminal trial, the third person to be excused since the high-profile proceeding started six weeks ago in San Jose, California.

There was no explanation given for the woman’s departure Friday after U.S. District Judge Edward Davila conferred privately at length with the juror, prosecutors and lawyers for Holmes in his chambers.

She was replaced with a female alternate. The dismissal means that at its approximate midpoint, the trial is moving forward with 12 jurors and two alternates, down from a total of 17 originally.

Read More: Holmes Juror Is Off Case Over Buddhist Qualms About Prison  Earlier this month, a Buddhist juror serving on the case was excused after she told the judge she couldn’t in good conscience vote for a prison sentence. Even after Davila explained that jurors are responsible for arriving at a verdict but not a sentence, the judge concluded she couldn’t separate her religious views from her obligations.

The first juror was excused after she discovered her employer wouldn’t excuse her from work for more than three months. The jury remains comprised of eight men and four women.