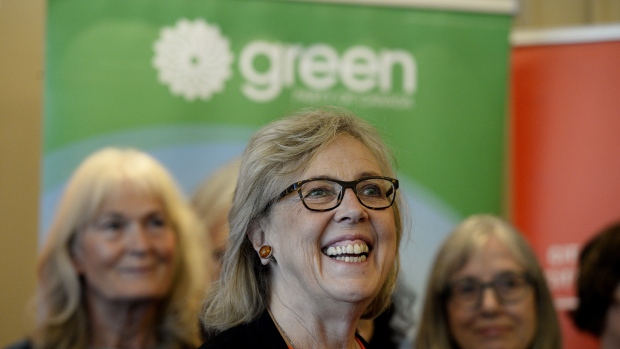 Elizabeth May, leader of the Green Party, smiles during a Canadian Club of Vancouver event at the Terminal City Club in Vancouver, British Columbia, Canada, on Monday, Sept. 30, 2019. , Jennifer Gauthier/Bloomberg

OTTAWA — Elizabeth May has stepped down as the leader of the federal Green party.

May told a news conference Monday on Parliament Hill that after 13 years in the job, she's stepping down as leader effective immediately. She appointed deputy leader Jo-Ann Roberts as her interim successor.

Shortly after the federal vote on Oct. 21, May hinted that she did not expect to be the Green party's leader in the next campaign. However, she did not say when she would step down.

May, 65, said she promised her daughter three years ago that the 2019 election would be her last as the party leader — though not necessarily her last as an MP.

She also said it's about timing — she's predicting the newly elected minority Parliament will last about two years, which means the Greens need to have a new leader in place with plenty of time to prepare for the next campaign.

A leadership convention is to be held in Prince Edward Island in October 2020.

"You have to look at what's in the best interest of the party," May said during a gathering that was ostensibly to introduce her new caucus in Ottawa.

Including May, three Green MPs were elected last month, the most in its history but far shy of the 12 needed to gain official party status. Paul Manly was re-elected in Nanaimo-Ladysmith on Vancouver Island after winning a byelection there last spring. Jenica Atwin became the first Green MP elected outside British Columbia, upsetting the Liberal incumbent in Fredericton.

The Green party went into the recent federal election running neck-and-neck with the NDP in most polls, fuelled by momentum achieved by electoral success in provincial campaigns in B.C., Ontario, New Brunswick and P.E.I. But a strong performance by NDP Leader Jagmeet Singh in the latter half of the campaign helped resurrect his party, which lost 15 seats but came out better than many had expected with 24 MPs.

Roberts is a former CBC journalist and radio host who May appointed as her second-in-command in 2018. She ran unsuccessfully for the Greens in Victoria in 2015 and in Halifax this fall.

She said she is taking on the role reluctantly given May's legacy as leader, but noted she will be focused on running the leadership race.

"This is not a replacement for Elizabeth May," said Roberts. "I don't think anybody would be up for that job."

The fact that neither of the other two Green MPs were tapped for the interim job ensures they are eligible to seek the permanent job at next year's leadership convention. Atwin, however, said she has no such plans, given her young family and the challenges of being a rookie MP.

Roberts confirmed that as the interim leader, she will not be allowed to seek the job on a permanent basis.

May has led the Greens since 2006, becoming the first Green MP elected to the House of Commons in 2011.

Having hinted recently that she might be interested in running to be Speaker of the House of Commons, May largely ruled out doing so in the short term, because Manly and Atwin asked her to remain in the caucus.