As frustrated as Suncor Energy Inc. investors have been with the oil company’s performance in recent years, several holders say they’re skeptical of a proposal by Elliott Investment Management LP to overhaul the company’s board, management and operations.

Elliott, founded by billionaire Paul Singer, has a track record of shaking up large underperforming oil and gas companies. In 2019, it called for a breakup of Marathon Petroleum Corp. and the removal of its CEO, which won the backing of other institutional investors.

Elliott is using a similar playbook at Suncor. It has asked for five directors to be added to Suncor’s board and demanded a management review after operational mishaps and accidents at its oil sands projects led to production misses and caused the company’s stock price to underperform its peers. Suncor is the worst-performing large Canadian oil sands producer over the past year, lagging Canadian Natural Resources Ltd., Cenovus Energy Inc., Imperial Oil Ltd. and MEG Energy Corp. 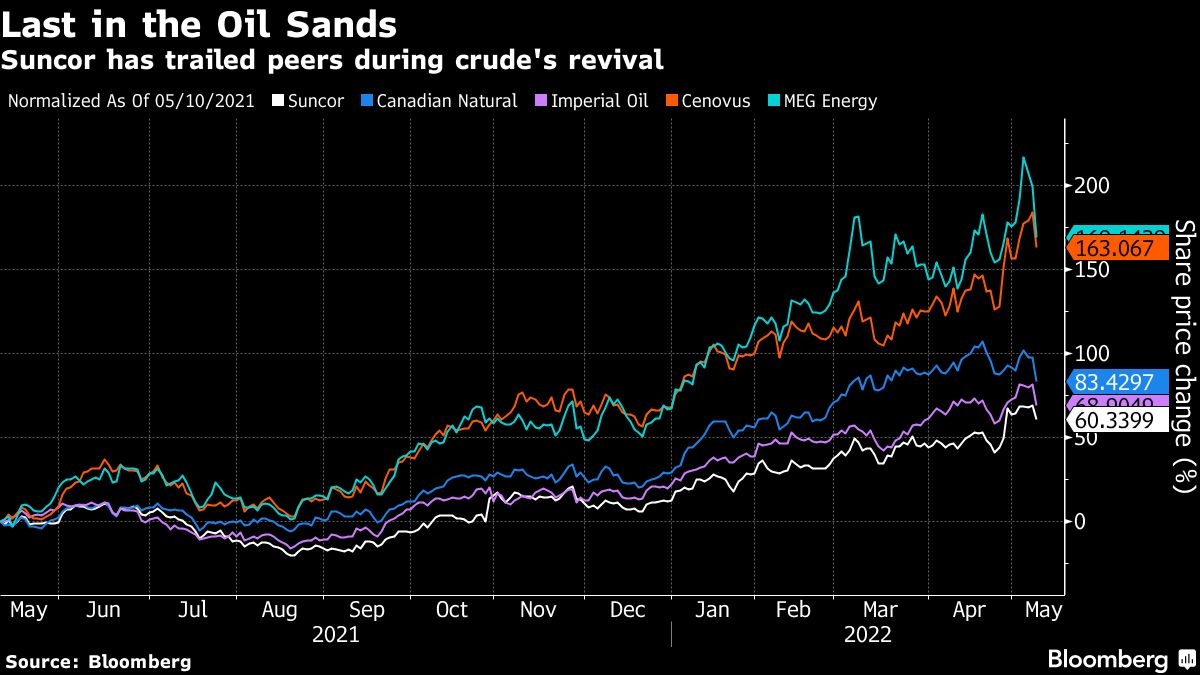 Ahead of its annual meeting Tuesday, at which disgruntled shareholders may have a chance to share their grievances, Suncor hiked its quarterly dividend 12 per cent, to 47 Canadian cents per share. The company beat analysts’ expectations for revenue and profit in the first quarter despite higher total operating costs, according to Bloomberg data. The Calgary-based company is now looking to sell off its UK assets in addition to its projects in Norway and its wind-energy portfolio.

Elliott hasn’t nominated directors for the meeting. The investment firm, which says it owns a 3.4 per cent economic take in Suncor, could increase that amount or partner with other shareholders to call a special meeting if the company resists change, according to a person familiar with the matter.

Suncor investors contacted by Bloomberg News said they want changes, but they all stopped short of endorsing Elliott’s full suite of plans. They were especially wary of its proposal to sell off Suncor’s Petro-Canada retail fueling stations, which it claims could surface US$5 billion of “trapped value.”

“There’s no guarantee that selling those will unlock a lot of value,” said Laura Lau, chief investment officer of Brompton Funds. Although there are two logical buyers in Canada for the assets, Parkland Corp. and Alimentation Couche-Tard Inc., either might draw significant antitrust scrutiny, she said.

The stations provide “stable cash flow and profits” regardless of the price of oil, said Norman Levine, a recently-retired managing director of Portfolio Management Corp. who says he’s owned Suncor for decades and currently holds shares worth a “few hundreds of thousands” of dollars.

Suncor’s operational troubles and a cut in its production guidance last year at its massive Fort Hills mine over unstable slopes have contributed to questions about the future of Mark Little, Suncor’s chief executive officer since 2019.

“They need somebody to shake them up and run them better,” Levine said.

Even some investors who are critical of Suncor question why Elliott should be given five seats on a board that’s currently 11 people, arguing that a small minority stake doesn’t warrant such influence.

Cation Capital Inc. President and CEO Sandy Edmonstone said five seats would be too many, but he still wants to see a board shuffle. That includes elevating board members Lorraine Mitchelmore and Russ Girling, previously the heads of Shell Canada and TC Energy Corp., respectively, to chair and vice chair. (The current chair, Michael Wilson, comes from the chemical and agriculture industries.)

Suncor’s share price has risen about 8 per cent since Elliott made public its proposal on April 28, as of Monday’s close, as despite a selloff in energy stocks. “I think the price reaction to the news is self-explanatory: investors were happy and wish changes are made going forward,” Gurgen Ayvazyan, a private investor, said via chat.

Ayvazyan said that he holds thousands of shares of Suncor and that Suncor is his biggest holding. It is “frustrating to consistently lagging peers and having operational issues,” he wrote. “Hoping for Elliott to succeed and make changes.”