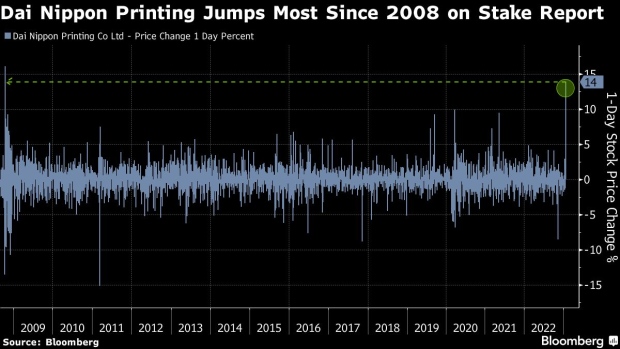 (Bloomberg) -- Dai Nippon Printing Co. notched its biggest daily stock-price gain since 2008 after a report that activist investor Elliott Management Corp. is building a stake in the venerable Japanese company.

Shares of the printing and electronic products firm jumped 15% Wednesday, with volume almost nine times the daily average. The Financial Times reported that Elliott had increased its investment to about $300 million, equivalent to nearly a 5% stake, becoming the third-largest holder.

Elliott just earlier this week confirmed a multibillion-dollar stake in Salesforce Inc., adding to a recent swell in global activist activity. The hedge fund run by Paul Singer is well-known to Japanese investors for pressing for changes at companies including Toshiba Corp. and SoftBank Group Corp.

Elliott’s engagement with Dai Nippon focused on demands such as more aggressive share buybacks, accelerated disposal of its cross-holdings in other Japanese companies and sale of real estate, according to the Financial Times. The company confirmed the investment but declined to comment on details, the report said.

“Dai Nippon Printing is a well known ‘value name’ because of its net cash and securities holdings which make up a large part of its market cap,” said Travis Lundy, an analyst who publishes on Smartkarma. “There is room for substantially more capital allocation efficiency here.”

Founded in 1876, Dai Nippon has garnered attention in recent years for its OLED panel metal masks and pouches for lithium-ion batteries. Its stock is still down 46% from an all-time high in 1997.

The investment news “could light a fire under what has been one of the dullest stocks in Japan over the last few decades,” Amir Anvarzadeh, a strategist at Asymmetric Advisors, wrote in a note, adding that the stock is “extremely cheap”.