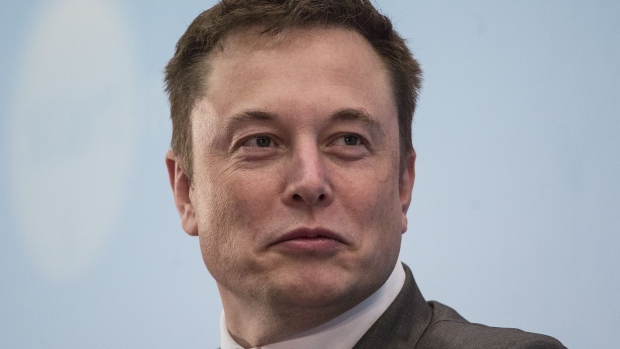 From Jack Ma to Pony Ma, the leading lights of China’s internet industry gather in Shanghai this week to showcase the country’s latest advances in artificial intelligence. But the real headliner could be American entrepreneur Elon Musk.

The Tesla Inc. and SpaceX impresario features prominently on the opening-day card of the World AI Conference, which kicks off Thursday in Shanghai as a rallying cry of sorts for China’s burgeoning AI industry -- one of the few arenas in which the race for supremacy remains wide open and Chinese achievements have both stunned and spooked Washington.

Musk’s presence at the important Beijing-endorsed AI symposium lends credence to China’s vision of becoming the world leader in the technology by 2030 and comes as Donald Trump wages a campaign to rein in the world’s No. 2 economy. Musk is scheduled to kick things off by engaging Alibaba co-founder Jack Ma in what’s expected to be a free-wheeling debate with one of China’s most lionized corporate chieftains.

Zhang Hongtao, one of the event’s organizers, said Musk’s attendance had been secured “quite early,” and that Musk would share more on the future development of Tesla’s Shanghai investment with conference delegates. A Tesla spokeswoman confirmed Musk’s attendance Tuesday.

Musk tweeted this month he’s in Shanghai to take the wraps off the China chapter of his Boring Co. passion project, though he’s expected to tout his other interests while in the financial capital. Tesla, which spent years haggling before it became the first foreign automaker to own a Chinese car-manufacturing facility, views the country as an increasingly important market as U.S. incentives for electric vehicles dwindle.

The Tesla chief executive is doubling down at a time of near-unprecedented uncertainty for American businesses struggling to tap the vast market. At home, Trump’s threatening to try and oust U.S. corporations from China -- though it’s unclear whether he has the legal wherewithal to do so -- and has criticized companies with huge Chinese footprints. Within the Asian nation, Beijing is exhibiting an increasing willingness to clamp down on foreign corporations that don’t play by its rules. Both superpowers are exchanging fire via punitive trade tariffs, exacerbating the global tumult.

Into the fray steps one of corporate America’s most prominent -- and controversial -- figures. Musk is personally championing Tesla’s self-driving technology, an “Autopilot” function he hopes to make more capable over time. It’s unclear why the billionaire is risking his home government’s wrath by granting the Shanghai conference his stamp of authority, but it may have something to do with the fact that Tesla relies on China for about 11% of revenue. It’s erecting a multi-billion dollar gigafactory in Shanghai that will produce batteries as well as cars for the local market.

“It’s a bit political when Trump’s big concern is that China has the aspiration to be the leader in AI, and the ramifications that has in military, tech and industrial leadership,” said Mark Tanner, founder of Shanghai-based research and marketing company China Skinny. “One interesting area to watch will be the values that China may incorporate into AI algorithms, which could be quite different to those in the West.”

Will also be launching The Boring Company China on this trip

Musk surely knows the kind of hornet’s nest he may be stirring up. Chinese AI has raised hackles in Washington like no other segment of the country’s vast corporate machine, in part because of the welter of headlines daily proclaiming how it may soon surpass the U.S. Broadly defined as anything from autonomous driving and robot waiters to facial recognition systems, names like Megvii Technology Ltd. and Sensetime Group Ltd., both backed by Alibaba Group Holding Ltd., are showing the way for the nascent industry. Megvii, backed by some of the nation’s most prominent state firms and tech corporations, filed in the last week for an IPO that could raise as much as $1 billion, in what’s regarded as the industry’s de facto coming-out party.

Apart from Ma, the heads of other important technology innovators from Tencent Holdings Ltd.’s Pony Ma to Didi Chuxing’s Cheng Wei will also take the stage to champion their country’s AI ambitions. They’re unlikely to pull their punches. Tencent, Alibaba and other established technology companies are not just at the forefront of the industry’s developments, they’re also handing billions to the likes of Sensetime and Megvii. To Beijing, what’s at stake is no less than China’s deserved place at the nexus of the modern global economy.

But Trump is in the way. State-run media have become less vocal in stating the goal of AI supremacy as America begins to go after its champions. His administration has levied potentially life-threatening sanctions on the sale of American technology to Huawei Technologies Co., the company at the heart of U.S.-Chinese tensions. It’s said to be considering adding the likes of Megvii to the unreliable entity list alongside Huawei. Washington is also taking more direct action, tightening scrutiny over research and researchers via actions the academic community has decried as stifling vital scientific exchanges.

“As President Xi said, the conference is all about mutual promotion, security safeguarding and outcome sharing,” said Zhang Ying, an official with the Shanghai Municipal Commission of Economy and Informatization. “We hope to take the chance to make more friends.”