Elon Musk helped legitimize cryptocurrencies in the eyes of Wall Street investors. Now, his tweets are scaring them off.

About a quarter of Bitcoin’s value has been wiped away in the span of a week, in part thanks to headspinning tweets from Musk on everything from Bitcoin’s toll on the environment to whether Dogecoin is the better digital currency. The token is now worth about as much as it was when Tesla first disclosed in February its intention to buy some.

Musk has always been tongue in cheek with his crypto dabbling, but his latest posts have sown confusion across the industry and revived the debate over whether the nascent asset class is a serious investment.

Can Bitcoin ever be a hedge against inflation and gold alternative with volatility like this? And is it simply a running joke on Twitter for the world’s second-richest man?

These questions are resonating with GAM Holding AG, which oversees 124.5 billion Swiss francs (US$138 billion), as unpredictable swings in crypto are proving a major drawback.

“Its volatility is so huge that it can actually distract clients from their investment goals,” said Julian Howard, head of multi-asset solutions at the firm. “It’s often driven by tweets rather than fundamentals.” 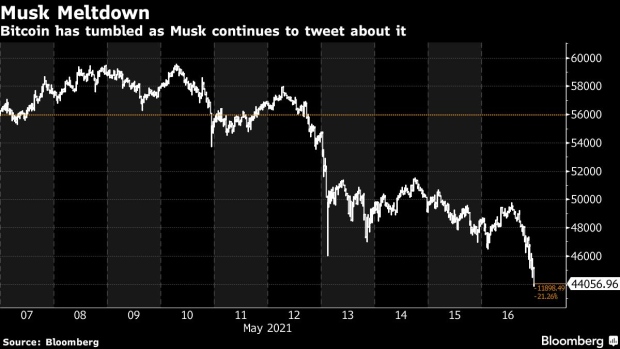 Before this month’s roller-coaster, the widespread adoption of crypto had been on an upswing, with Tesla’s US$1.5 billion purchase of Bitcoin in February a watershed moment. At the time, Musk announced he would allow customers to buy cars with Bitcoin and would keep a portion of Tesla’s balance sheet in the token.

The move, the first by a major corporation, raised expectations that other corporate treasurers would follow suit and adoption of crypto as a medium of exchange would take hold. Goldman Sachs Group Inc. and Morgan Stanley also announced plans to offer their clients exposure to crypto.

With hoards of new retail and institutional investors piling in, prices shot up from US$29,000 in January and reached US$60,000 last month. After the pullback, the token now trades around US$43,000 and some analysts say the market still looks precarious, especially as the fate of Bitcoin becomes tied to Musk’s Twitter outbursts.

“I would definitely expect reduced appetite going forward,” said Felix Dian, founder of crypto-focused MVPQ Capital in London, which counts 70 per cent of its investors as institutions. “First, because of the loss of momentum from a technical perspective, but also because of the extreme sensitivity on environmental issues.”

Because Bitcoin has no underlying fundamentals, such as profit streams or interest payments that help anchor the value of stocks and bonds, it’s inherently a speculative bet on market trends in the years ahead.

“It’s the ultimate momentum trade,” said Wayne Wicker, chief investment officer at Vantagepoint Investment Advisers. “The mainstream adoption will come from institutional investors over time and regardless of Elon Musk.”

Still, for all the eye-watering moves lately, Bitcoin is far less volatile than it used to be. Benson Durham of Cornerstone Macro LLC says Bitcoin’s correlation to other assets, therefore its impact on overall portfolio swings, is a more relevant metric for investors.

By that measure, there’s “not much change to write home about during the recent pullback,“ he wrote. 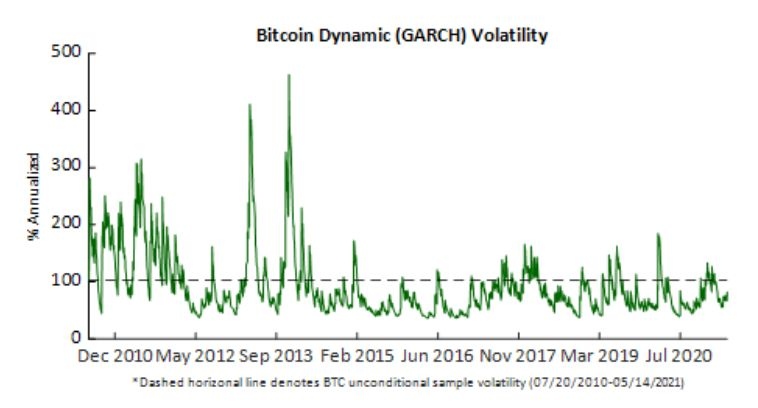 Meanwhile, crypto insiders say the Musk-driven volatility is just a temporary blip and will soon blow over.

“We take a longer view, and investors would be right to do the same,“ said Greg King, chief executive officer of Osprey Funds, which offers crypto trust funds. “The key question is whether we think this asset is going to last? The answer is yes.”