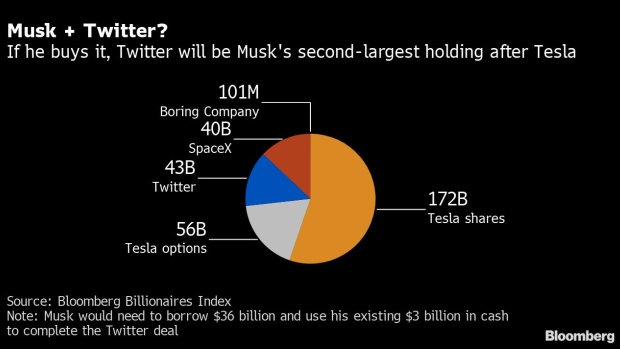 (Bloomberg) -- Even for the world’s richest person, $43 billion is a steep price.

Elon Musk’s proposed all-cash offer to buy Twitter Inc. represents about one-sixth of his $259.3 billion fortune. Yet the vast majority of that wealth is tied to his stake in Tesla Inc., the electric carmaker he co-founded that has surged in value over the past two years and lifted him to the top of the Bloomberg Billionaires Index.

The purchase isn’t straightforward, but Musk has several financing paths. One option is to sell his Tesla shares outright. Another is borrowing against them to stage a leveraged buyout, possibly with outside partners. Musk, 50, currently has about $3 billion in cash or other somewhat liquid assets after spending $2.6 billion buying a 9.1% stake in Twitter in recent months, according to Bloomberg calculations.

For Musk to raise the additional $36 billion in cash needed to buy the rest of Twitter would require selling about 36.5 million Tesla shares, or more than a fifth of his stake. Such an exit could risk a slide in the company’s share price -- not to mention potentially raise questions about the commitment, financial and otherwise, of its chief executive officer.

His other option is to borrow against his positions in Tesla and space exploration company SpaceX.

“This becomes a hostile takeover offer which is going to cost a serious amount of cash,” said Neil Campling, head of TMT research at Mirabaud Equity Research. “He will have to sell a decent piece of Tesla stock to fund it, or a massive loan against it.”

But even for the wealthiest person in the world, there are limits: The Bloomberg index estimates that he’s already borrowed about $20 billion against his shares, leaving about $35 billion remaining that he could theoretically take out against the two holdings.

“Musk’s ‘best and final’ $43 billion non-binding offer has numerous conditions, including completion of financing, which we believe give it a low probability of success,” Robert Schiffman, a Bloomberg Intelligence senior credit analyst, wrote Thursday in a report.

Musk had 52% of his Tesla shares pledged as of June 30, according to the company’s most recent proxy filing. The maximum that can be borrowed against pledged shares is 25% of their value, according to a Tesla policy.

Since then, Musk has increased his share count by exercising options. His 172.6 million shares are worth $172 billion, meaning he could borrow $43 billion by pledging all of them.

Musk said in December 2019 that he had also pledged some of his SpaceX shares. His 47% stake in the company is worth about $47.5 billion, based on its February 2021 funding round. If there’s a similar maximum loan-to-value ratio, he could raise another $12 billion by fully pledging his SpaceX position -- although banks tend to be much more cautious funding a privately held position, given the lack of liquidity.

Also, Musk has Tesla options worth $56 billion that he might be able to borrow against.

Bank of America Corp., Goldman Sachs Group Inc. and Morgan Stanley were three of the banks that provided Musk personal loans, according to a 2020 Tesla filing. He has hired Morgan Stanley to advise on the Twitter bid, and his family office, Excession, is run by longtime adviser Jared Birchall, a former Morgan Stanley banker.

No matter how he goes about it, buying all of Twitter would be a stark shakeup of Musk’s empire. His purchase of a 9.1% stake, first disclosed last week, marked his first significant diversification outside of Tesla and SpaceX.

“I am not playing the back-and-forth game,” Musk said in Thursday’s filing. “I have moved straight to the end. It’s a high price and your shareholders will love it. If the deal doesn’t work, given that I don’t have confidence in management nor do I believe I can drive the necessary change in the public market, I would need to reconsider my position as a shareholder.”

Musk has played up his devotion to both Tesla and SpaceX, frequently tweeting about their achievements and claiming to sleep on the floor of a Tesla factory to set an example to his employees. Meanwhile, since disclosing his stake in Twitter, he has appealed to fellow users about potential moves and in one case suggested the website might be dying, given the lack of tweets from some celebrities.

In recent years, Musk has indicated he’s streamlining at least some aspects of his financial affairs. He’s sold multiple mansions in California after vowing to “own no home,” in 2020. He currently lives in Texas, where he relocated the headquarters of Tesla last year.