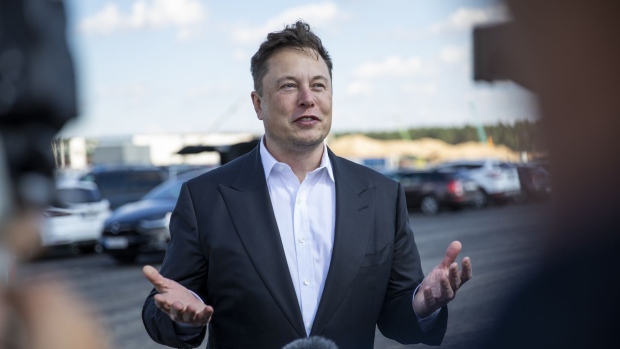 GRUENHEIDE, GERMANY - SEPTEMBER 03: Tesla head Elon Musk talks to the press as he arrives to to have a look at the construction site of the new Tesla Gigafactory near Berlin on September 03, 2020 near Gruenheide, Germany. Musk is currently in Germany where he met with vaccine maker CureVac on Tuesday, with which Tesla has a cooperation to build devices for producing RNA vaccines, as well as German Economy Minister Peter Altmaier yesterday. (Photo by Maja Hitij/Getty Images) , Photographer: Maja Hitij/Getty Images

(Bloomberg) -- Neuralink Corp., the brain-computer interface startup run by Elon Musk, doesn’t yet have a product ready for broad human consumption, but the project has already succeeded in seeding several offshoots that are developing different technical approaches to manipulating the brain.

Musk’s company is the most deeply funded and, thanks to its owner, the most visible of the bunch. Musk will draw further attention to this once-obscure area of scientific research on Wednesday night when he hosts an event to showcase developments at Neuralink’s office in Fremont, California.

It’ll be years before there’s a chance of walking into a store and buying a computer to be implanted in your brain, but Neuralink has already left an outsized mark on the field. Most of the people who were there at the beginning in late 2016 and early 2017 have left, and several are working on new kinds of brain-computer interfaces. Of nine key members on Neuralink’s founding team, just two remain: DJ Seo, the vice president of implants, and Musk.

Many workers have cycled through Neuralink over the last five years. LinkedIn data shows almost 200 former employees. Many of them are now working on projects that draw on their experience at Neuralink, which seeks to place electrodes in human brains to first help paralyzed people and eventually augment even healthy people’s intelligence.

These new companies are built on decades of research in academia and at places like the US Defense Advanced Research Projects Agency, better known as DARPA. “We have recently crossed the threshold in our basic science understanding of many areas of neuroscience, enabling us for the first time to translate these innovations into products and services,” said Alexander Morgan, a partner at Khosla Ventures, where he has funded the BCI company Synchron Inc.

So far this year, venture capitalists have backed 37 BCI startups, compared with 17 in 2016, according to the research firm Pitchbook. They invested $568 million last year and $263 million so far this year, up from $175 million six years ago.

The BCI field is showing signs that resemble what happened in personal computers, said Amy Kruse, a general partner at Prime Movers Lab and an investor in the BCI company Paradromics. In computers, Intel Corp. co-founder Gordon Moore posited a theory that the number of transistors that could fit on a microchip would double roughly every two years, creating increasingly powerful machines. “It’s a culmination of the impressive results in this field,” said Kruse, “and the fact that Moore’s Law is finally impacting neurotechnology devices in a meaningful way.”

The startup boomlet isn’t solely a credit to Neuralink. Among others, Alphabet Inc.’s Google and Meta Platforms Inc. do their own BCI research, and many of those employees have left for startups. They tend to bring credibility to whatever projects they get involved with next. That makes it easier to recruit and raise funds.

Here’s a look at where members of Neuralink’s founding team landed:

Tim Gardner was poached by Neuralink from Boston University’s biology department in 2017. After leaving in 2019, he went right back to academia, joining the faculty of the University of Oregon where he works as an associate professor. He’s also a partner at the newly formed Interface Ventures, which launched this year and aims to back companies combining physics with biology.

Timothy Hanson, a specialist in flexible electrodes, worked on some of Neuralink’s key early technology, the so-called sewing machine process that aims to quickly implant electrodes into brain tissue with minimal damage. He’s now consulting for Precision Neuroscience, founded by another Neuralink alumnus. Hanson said he is also working on his own startup idea and plans to unveil research on it in the next few months.

Max Hodak, formerly the president of Neuralink, is the best-funded of his fellow alumni, with $160 million in capital for his new endeavor, Science Corp. Like Neuralink, its aim is to communicate with neurons to help solve a health problem and in future, add to that by enhancing brain activity for perfectly healthy people. While Neuralink plans to implant electrodes deep within brain tissue, Hodak is taking a photonics approach, using the optic nerve as a pathway to the brain. The initial treatment is for blindness.

Paul Merolla, a specialist in chips, worked as a research scientist at International Business Machines Corp. for six years before joining Neuralink in late 2016. He quit this June and has kept a low profile since. In a blog post at the time, he said he’s working on a stealth project and still finds Neuralink's mission “extremely compelling.”

Ben Rapoport, formerly a Neuralink neurosurgeon, moved across the country to work on an electrode-based device to treat epilepsy and other intractable medical conditions. The prototype developed by his company, Precision Neuroscience, would still require surgery that opens the skull, but its device sits on top of the brain rather than penetrating into brain tissue.

Philip Sabes was working as a professor and at the Center for Integrative Neuroscience at the University of California, San Francisco, when he joined Neuralink. He then moved to Seattle and started at a startup, Starfish. Little information is available about what Starfish does, and Sabes left the company this year. He declined to comment on it. By phone, he said he plans to launch a new project next year focusing on clinical neuromodulation.

Vanessa Tolosa was the neurotechnologies lead at Lawrence Livermore National Laboratory when she joined Neuralink. After leaving in early 2020, she worked as a consultant for a time and then joined Meta, where she’s now a hardware technology manager for its Reality Labs division, according to her LinkedIn profile.