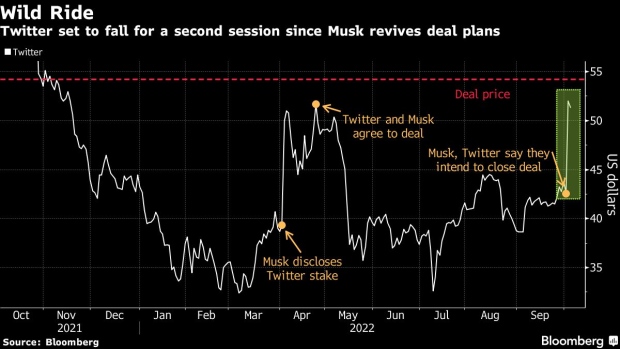 (Bloomberg) -- Stock markets are still not entirely sold on Elon Musk’s $44 billion takeover of Twitter Inc. after the billionaire revived the deal at its original price earlier this week.

Shares in the social media firm slipped 0.7% to $50.95, taking them further below Musk’s offer of $54.20 a share. The stock is set to slip for a second day after soaring on Tuesday when the Tesla Inc. chief made a surprising U-turn from his effort to back out of the deal, potentially avoiding a contentious courtroom fight.

While most analysts see the deal closing fairly quickly, concerns persist surrounding the funding of the transaction, keeping Twitter’s stock about 6% below the offer price.

Banks led by Morgan Stanley and investors including Oracle Corp. Chief Executive Officer Larry Ellison are reviewing the deal’s original $12.5 billion debt-financing package. Lenders may struggle to sell the risky Twitter buyout debt amid a deterioration in credit markets since they committed to the financing back in April.

“The key question is financing and Twitter will probably not accept conditional financing,” said Jean-Francois Comte, managing partner at merger arbitrage firm Lutetia Capital. “Because of credit market evolution over the past months, we can reasonably assume there are serious discussions between Musk and the banks,” said Comte, who still considers the deal attractive.

Wedbush analyst Dan Ives says he doesn’t see the debt situation around the deal falling apart, though some are more skeptical.

The most plausible reason for the deal not to proceed “revolves around funding issues,” said Neil Campling, an analyst at Mirabaud Securities. “He (Musk) will try and wriggle out.”