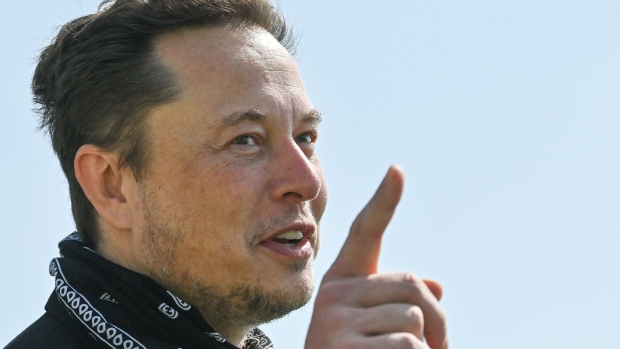 GRUENHEIDE, GERMANY - AUGUST 13: Tesla CEO Elon Musk talks during a tour of the plant of the future foundry of the Tesla Gigafactory on August 13, 2021 in Grünheide near Berlin, Germany. The US company plans to build around 500,000 of the compact Model 3 and Model Y series here every year. (Photo by Patrick Pleul - Pool/Getty Images) , Photographer: Pool/Getty Images Europe

(Bloomberg) -- Elon Musk had some choice words for cryptocurrency exchange Binance on Twitter Tuesday, after the Tesla CEO raised concerns about the plight of fellow Dogecoin holders caught up in a technical glitch.

An upgrade of the Dogecoin network on Nov. 10 appeared to have caused an issue with network withdrawals, Binance said in a statement the next day. A “very small number of users” were affected, they said, explaining that some previously failed Dogecoin withdrawal transactions got resent after the update, and “we are kindly requesting those users to return the assets.”

Musk said in a tweet Tuesday that the error “sounds shady,” prompting Binance, the world’s largest crypto exchange, to respond with “no, not shady - just frustrating.” In return, Musk said “Doge holders using Binance should be protected from errors that are not their fault.”

Binance said it’s working with the DOGE network, but said it is taking longer than usual as the exchange has to rebuild the digital wallets that hold the coins. Technical glitches are common on blockchain platforms.

While the official Binance handle stuck to official explanations, the company’s CEO Changpeng “CZ” Zhao cheekily hit back with a link to a story on Tesla recalling nearly 12,000 cars as a result of a software glitch.

The back-and-forth is indicative of the sometimes chaotic nature of cryptocurrencies, especially when it comes to market infrastructure that’s had to rapidly scale to meet demand. Dogecoin, a memecoin that was created as a joke in 2013, is up more than 6,000% in the past year according to CoinGecko pricing, spurred by frenzied trading and wider cryptocurrency acceptance. The price was little changed Tuesday.

Binance acknowledged that users are “rightly” upset. But it isn’t yet clear how many of those users may have returned the coins, or if they have any incentive to do so.