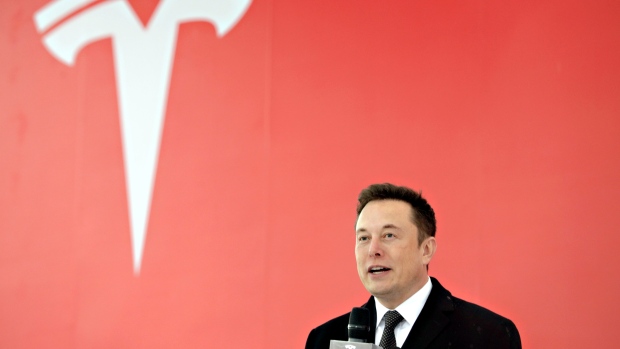 Elon Musk, chief executive officer of Tesla Inc., speaks during an event at the site of the company's manufacturing facility in Shanghai, China, Jan. 7, 2019 , Bloomberg/Qilai Shen

After a November tweet by Musk, the two companies started sounding out possible prospects for a battery-powered van through a series of phone calls involving Jerome Guillen, a Tesla executive who previously worked for Daimler.

“These talks are happening,” Chief Executive Officer Dieter Zetsche said Wednesday in Stuttgart, adding that the “outcome is open.”

The enthusiasm by Tesla’s CEO was apparently spurred by feedback from company technicians who use Sprinter vans to travel to customers requiring service, Zetsche said.

Daimler will start offering an electric version of the Sprinter later this year. The mid-sized van will have a battery range of some 150 kilometers (93 miles) and a maximum payload of more than 1,000 kilograms (2,200 pounds). It remained unclear if the potential project would involve joint development of a new vehicle or if Tesla technicians would switch to the upcoming battery-powered version.

A cooperation with Tesla would be a revival of ties that date back a decade when Daimler acquired a stake in the Silicon Valley startup. It sold the holding in 2014 and booked a $780 million windfall profit at the time.

Teaming up with old and new peers is becoming increasingly important in the auto industry to share the enormous costs for developing electric and self-driving cars. Zetsche’s successor Ola Kallenius, who is set to take over as Daimler CEO in May, said last month that he remains open to such initiatives.

Daimler’s existing alliance with Renault SA and Nissan Motor Co. forged in 2010 is “largely unaffected” by the tensions that erupted following the surprise arrest of Carlos Ghosn, Zetsche said Wednesday. Joint projects in areas like vehicle development or engine supply are mainly bilateral contracts with Renault or Nissan. “We’ll just have to wait now how the alliance is developing further,” Zetsche said.

The maker of Mercedes-Benz luxury cars is also discussing further cooperation projects with its largest shareholder, Zhejiang Geely Holding Co. Zetsche said the company is open to adding Geely-made premium electric cars to a ride-sharing initiative in China that was announced last year and is so far focused on Mercedes models.

Talks are ongoing about other projects, “which could also take on a bigger dimension” than the ride-sharing program, Zetsche said, declining to elaborate.