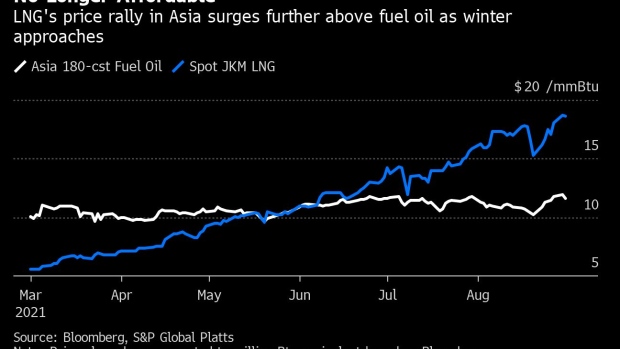 (Bloomberg) -- Pakistan and Bangladesh are among developing nations in Asia that can no longer afford to pay surging liquefied natural gas prices, raising the risk of power rationing or the burning of dirtier alternatives this winter.

Bangladesh’s state-run Petrobangla plans to stop buying spot LNG cargoes for the rest of the year after a quadrupling of prices over the past year to a seasonal high. Pakistan has repeatedly canceled and reissued LNG purchase tenders in an effort to get better offer prices, without avail.

The evolution marks a stark turnaround after developing Asia helped drive a surge in trading of the super-chilled fuel and built LNG import strategies on the premise that spot shipments would be abundant and cheap. Unlike richer counterparts in the region that can pass on this year’s historic price rally to end-users, some governments may need to rethink LNG procurement strategies and reduce exposure to the volatile spot market, switch to dirtier fuels such as coal or oil or even curb electricity production.

“With spot prices so high and with relatively low development, these countries may not be able to afford the current sky-high prices for gas on the global market,” said Ron Smith, senior oil and gas analyst at BCS Global Markets. A return of power rationing this winter “seems quite possible” for Bangladesh and Pakistan.

Nations in South Asia have the most potential to take advantage of cheaper fuel oil to offset the rise in spot LNG prices through this winter, said Felix Booth, head of LNG at energy-intelligence company Vortexa.

On an energy-content basis, fuel oil prices in Asia were about $11.60 a million British thermal units on Aug. 31, according to data compiled by Bloomberg. That’s about $7 below spot LNG prices.

The main difficulty is that “gas tariffs are regulated in these markets” and importers can’t pass through all supply costs to consumers, said Abhishek Rohatgi, an analyst at BloombergNEF. “Hence they will try to minimize their procurement costs by switching to fuel oil.”

While cash-strapped nations are shunning spot LNG purchases, that is unlikely to have a serious impact on suppliers, which tend to deliver most of their shipments via long-term contracts. Meanwhile, utilities in countries such as South Korea and Japan are continuing to snatch up spot shipments despite the price jump, passing on the costs to their more affluent customers.

In India, companies have considerably reduced spot buying but still continue to procure some shipments for industrial sectors that are willing to pay the higher rates. Even China, which has been driving LNG demand this year and is set to overtake Japan as the biggest market, curbed spot buying over the summer, with some of the nation’s biggest companies choosing to procure cheaper pipeline gas.

And Asian buyers are already shifting back to term contracts. China’s ENN Energy Group will seek more new LNG supply from long-term contracts to offset volatility risks from purchasing spot cargoes. Earlier this year, Pakistan signed a new long-term contract with Qatar, which starts in 2022 and will lower exposure to the spot market.

Meanwhile, the natural gas supply crunch is poised to worsen this winter, when demand for heating in the northern hemisphere peaks. Traders and analysts see spot LNG prices rising to all-time records -- making the fuel even more unattainable for the developing world.