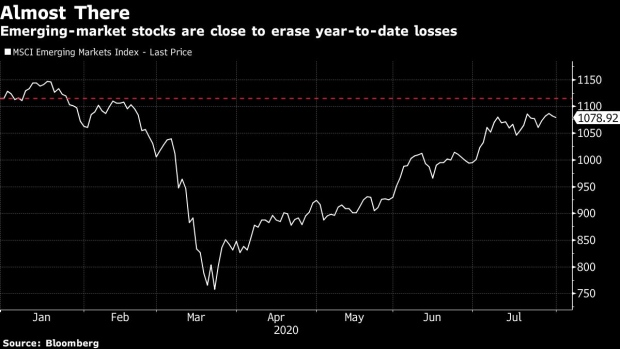 Pedestrians wearing protective masks walk along 25 de Marco street in Sao Paulo, Brazil, on Thursday, July 30, 2020. Brazil added 69,074 cases on Wednesday, pushing the total number of infections to over 2.55 million, according to the Health Ministry. , Bloomberg

(Bloomberg) -- Emerging-market stocks and currencies are within touching distance of erasing their pandemic-fueled losses of 2020. Too bad the virus is still running riot, economies are shrinking and central banks are getting low on firepower.

In fact, the backdrop is so grim that investors may soon start to take the view that prices are starting to defy gravity. After falling more than 30% by March, developing-nation stocks as measured by MSCI Inc.’s benchmark index are just 3% below the level at which they started the year. A gauge of currencies is also 3% short of its 2020 starting point, while a Bloomberg-Barclays index of local bonds is already back in positive territory.

The reality is that currencies have been underpinned by the slide in the U.S. dollar, stocks are riding the global stimulus wave and bonds are enjoying the boost provided by more than 5,500 basis points of interest-rate cuts across emerging markets since the start of 2019.

Which makes the start of August -- typically one of the riskiest months of the year for the asset class -- a cause for nervousness.

“Given the pandemic shows no signs of subsiding, a weak economic tone will almost certainly be carried over to August,” Prakash Sakpal, an economist at ING Groep NV in Singapore, wrote in a report. “Unfortunately, central bank monetary easing to support growth has also reached its limits.”

Activity data due in coming days may help investors gauge where the developing world is headed next, as many countries seek to recover from periods of government-imposed social isolation. While PMIs from Asia, the region first affected by the Covid-19 pandemic, are expected to improve, activity data in Chile may underscore the severity of the virus in Latin America, the current hotspot for the disease.

Brazil’s central bank is expected to cut rates by a quarter-percentage point this week, taking borrowing costs to a record low of 2% in a bid to support an economy devastated by the second-highest number of Covid-19 cases. Bets on more easing are less certain in India, where policy makers are weighing the necessity of further stimulus against the risk of a rising inflation rate.