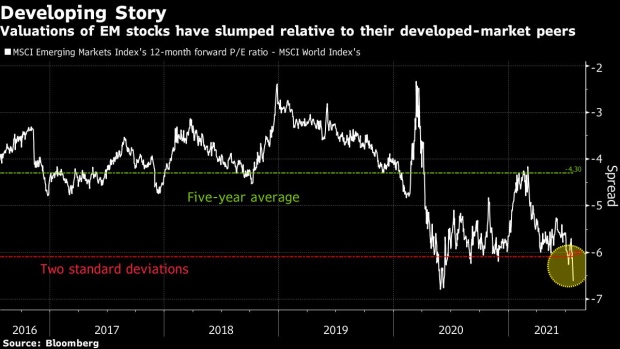 (Bloomberg) -- China’s sharp selloff has caused emerging-market stocks to erase all their gains for the year.

The MSCI Emerging Markets Index is now negative for 2021 after a 2.4% drop on Monday. Strategists are divided on the prospects for a revival. State Street Global Markets recommends allocating only about 20% of funds for equities to developing nations. Others such as AllianceBernstein see a return to strong risk appetite.

“It is too early to rotate back toward emerging-market stocks, particularly as the Fed’s recent policy shift lends some near-term support to the dollar,” said John Bilton, head of global multi-asset strategy at JPMorgan Asset Management in London.

Emerging-market stocks have been battered this year by the resurgence of virus cases, and given up a 12% advance since February. The asset class is now deeply underperforming other equities. The MSCI developed-market index is still up 15% this year.

In developing markets, he prefers areas that are more geared toward the global emergence from Covid, notably the commodity driven market of Brazil and the technology markets of South Korea and Taiwan.

Stocks in Malaysia and the Philippines are among the worst performers in the world this year as Southeast Asia battles a resurgence of the coronavirus, while in China, a gauge of Internet stocks has lost more than a third of its value since a February peak amid a crackdown on the technology sector.

Slowing growth in China, once the world’s leader in the pandemic recovery, poses another challenge as its export demand eases. The prospect of the Federal Reserve moving to reduce stimulus is also putting pressure on developing-nation currencies, creating another headwind.

Against such a backdrop, emerging-market stocks continue to get cheaper. The developing-market index is trading at 13 times forward price-to-earnings, more than two standard deviations below the five-year average relative to its developed-market peer.

“We will continue toward a market driven by earnings growth rather than multiple expansion as extreme liquidity provision measures ease,” he said. “Asean, Indonesia, Malaysia will have a harder time with the recovery.”

Still, there are those who expect emerging markets to eventually outperform.

“Not only will many EM markets be viewed as plays on cyclical recovery that’s less fully priced, but the large-cap tech names within EM that weigh so heavily on the index will probably get another look,” Morgan Harting, a New York-based money manager at AllianceBernstein, said in a written response. “I’d expect some of the sector strategists to rebalance back to the China names as some of the regulatory concerns there are clarified.”

Investors are also overlooking the transition to the new economy in emerging markets, according to HSBC Asset Management, pointing to sectors such as financial technology to e-commerce and 5G applications.

“This pivot brings about stronger for longer, less cyclical earnings growth and ultimately higher valuations for companies aligned with the new economy,” Stephanie Wu, head of emerging markets equity at HSBC, said in a written response.