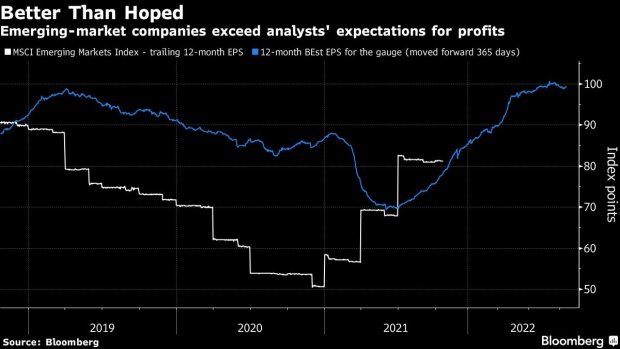 Pedestrians wearing protective masks walk beneath Christmas lights in the Shinchon district in Seoul, South Korea, on Saturday, Nov. 28, 2020. Bank of Korea Governor Lee Ju-yeol said the economy will likely shrink less than expected this year despite the worsening pandemic, though he issued a warning over rapid won gains that could undermine the pace of recovery. Photographer: SeongJoon Cho/Bloomberg , Bloomberg

(Bloomberg) -- Investors in emerging-market stocks are finally getting rewarded, as promising signs for company earnings prompt the longest weekly rally since June.

For the first time in three years, developing-nation companies are beating profit forecasts, with average earnings coming in 3.6% above analysts’ projections, according to data compiled by Bloomberg. That helped to deliver a third week of gains for the MSCI Emerging Markets Index. Traders are now awaiting results from index heavyweights including Samsung Electronics Co., China Construction Bank Corp., and Sberbank of Russia, all scheduled to report this week.

It’s a key moment for emerging equities, which have struggled with risks ranging from Chinese regulatory crackdowns to the threat of stagflation. Investors that track the MSCI index are barely breaking even, with the gauge poised for its worst annual performance since 2018. But a strong earnings season could make all the difference.

For Malcolm Dorson, whose emerging-market stock fund has outperformed 94% of peers over the past three months, the prospects for certain sectors look especially good.

While weakness from South Korea’s Samsung was one of the top contributors of negative returns for the MSCI gauge in the third quarter, preliminary results from the technology company have already set the stage for a solid quarter. China Construction Bank’s earnings are expected to show a 10% climb in 2021 after a 1.6% gain in 2020, and consensus forecasts for Russia’s Sberbank revenue rose by about 3% in the past three months, with further upgrades possible. The three companies are among the top 20 holdings for MSCI’s equity gauge.

Tension still lies in results from Chinese companies, which have been hit especially hard by anxiety over the government’s regulatory tightening and concern over Evergrande’s debt troubles. Stocks from the world’s second-largest economy make up about 31% of the developing-nation benchmark, making their performance critical for broader emerging markets.

Goldman Sachs expects the MSCI EM index to reach 1,475 points in the next 12 months, or 11% higher in local currency terms, largely in line with gains forecast for developed markets. The firm is focused on shares that will benefit from “domestic reflation” trends in emerging markets outside of northern Asia.

“We are comforted to see these parts of the equity market with very steady earnings-per-share growth and performance in recent months, despite the macro headwinds from the Chinese property market and U.S. interest rate policy,” Goldman strategist Caesar Maasry said in a note.

Following are key data to look out for this week: