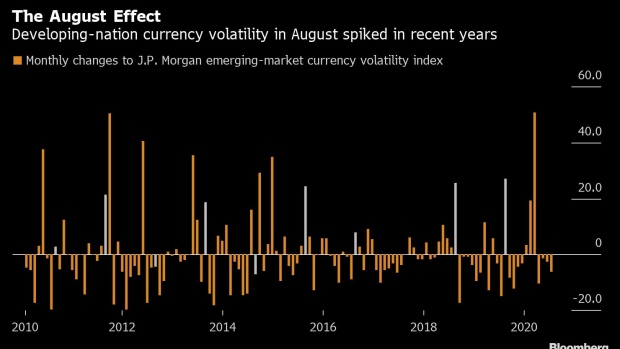 Vendors handle sweets and snacks in a store inside the Pasar Senen market in Jakarta, Indonesia, on July 8. Photographer: Dimas Ardian/Bloomberg , Bloomberg

Some investors may be sleepwalking into one of the riskiest months for emerging markets.

MSCI’s index of developing-nation currencies has declined in August in seven of the last 10 years, with volatility spiking in eight of those amid lower liquidity as traders depart for summer vacations. For currencies like South Africa’s rand, Turkey’s lira, Indonesia’s rupiah and India’s rupee, August is historically the worst month of the year, based on the average decline over the past five years.

This year won’t be an exception, even as the coronavirus pandemic prevents travel, according to Investec Bank Plc and Societe Generale SA. Yet investor anxiety, as measured by implied volatility for those currencies, is at the lowest since at least March, a sign they’re underestimating the risk of large price swings.

“Markets are complacent about risk at present,” said Julian Rimmer, a trader at Investec in London. “This is largely a function of hugely accommodative central banking policies globally which is subduing volatility.”

While traders and investors won’t be packing their bags for summer holidays, many of them will still take time off, Rimmer said, leading to the usual drop in liquidity over August that tends to exaggerate market moves. And risks abound, from rising tension between the U.S. and China to worsening economic data and renewed virus outbreaks around the world.

“Emerging-market currencies are always more vulnerable in August because volumes are understandably lower and therefore the illiquidity can exaggerate volatility,” Rimmer said. “Moreover, governments are invariably in a lesser state of preparedness for emergencies, again because so many people are away.”

For SocGen, August is a “dangerous” month, with investors advised to hedge against sudden swings in currencies. The pattern of rising volatility and weakening currencies has sharpened in recent years, according to Jason Daw, a Singapore-based strategist.

Investors appear to trust “that positive trends in risk assets can persist, that there is no catalyst for a disruption, and that low trading volumes means that markets will be boring over the coming month,” Daw said. “For emerging-market currencies, this has been the wrong view for the past ten years.”