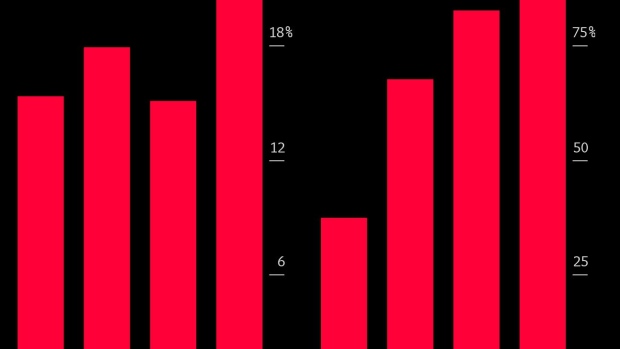 Workers unload goods from a truck in the main market area in Gandhidham, India, on Thursday, Sept. 8, 2022. India is scheduled to announce its CPI figures on Sept. 12. , Bloomberg

The result is a growing risk of monetary-policy error. Countries from Poland to Colombia, India to South Korea, are walking the tightrope trying to figure out the exact level of borrowing costs that won’t cripple their economies but will keep a lid on consumer prices. The answer isn’t clear or easy. As long as the Federal Reserve keeps raising rates and China is hobbled by Covid, policy makers in poorer nations remain at the mercy of factors beyond their control.

Emerging markets have witnessed an investor exodus this year despite having raised interest rates at an unprecedented pace. Local sovereign bonds plunged by the most since at least 2009, and currencies faced the worst annual losses since the Russian default of 1998. While a rebound since October has mitigated that slump, smaller economies are just one misstep away from a full-blown currency crisis. Any further selloff may shut off their access to capital markets, and push them into a cost-of-living crisis or even an economic collapse like that of Sri Lanka.

“Policy error is certainly something that we have to worry about,” Tilmann Kolb, a Zurich-based emerging markets analyst at UBS Global Wealth Management, said about the dilemma he sees in central and eastern Europe. “If you raised rates by another 25 basis points, would that sink your economy?”

Hungary was the first to learn this bitter lesson. After one of the world’s fastest tightening cycles that saw the benchmark rate multiply more than 21 times in 16 months, the eastern European country took a pause after a move in September. But within days, it was forced to resume a hawkish stance by inflation surging to the highest level since 1996 and its currency plunging to a record low against the euro. Now, the pressure is building up in the opposite direction, with the economy contracting on a quarterly sequential basis and economists surveyed by Bloomberg projecting a recession in the first half of 2023.

“We have to face it -- the Hungarian economy is in a state of near-crisis,” central-bank Governor Gyorgy Matolcsy told a parliamentary hearing on Monday.

Hungary’s experience is an early warning for many other emerging markets. Within eastern Europe, both the Czech Republic and Poland are half way there, as forecasts show they face an 82.5% and 67.5% probability of a recession, respectively, despite halting rate hikes months ago. With inflation hovering in double digits in both countries, they may have little room to combat the slowdown.

“There is a question mark whether the Poles can stop hiking,” said Amer Bisat, the global head of emerging-markets fixed income at BlackRock Inc. in New York. “They would like to stop hiking because they are worried about the economy, but inflation is not under control.”

It’s not that the temptation to pause tightening is entirely unjustified. Inflation has indeed shown signs of peaking in several emerging markets, especially early hikers like Brazil. Easing US consumer-price growth has emboldened policymakers and investors to turn attention to growth concerns. But examples like Hungary have imposed a reality check; it might be too early to stop the fight against costs of living after all.

The dilemma echoes in faraway Colombia. The nation famous for aromatic coffee, fine emeralds and exotic fruits may report a sixth successive month of hardening consumer prices even as economic expansion falters. Forecasts for 2023 call for a a dramatic drop in gross-domestic-product growth, to 1.8% from 7.5% in 2022. Policy uncertainty around the newly formed Leftist government worsens the outlook, according to Barclays Plc.

“The problem would be for the new government to implement a more aggressive fiscal expansion or become too radical in terms of impeding investment and hydrocarbon production,” said Erick Martinez, a currency strategist at Barclays. “That would increase the country risk and warrant higher rates for longer. It’s not our base case but it’s a risk.”

The conundrum is spreading to Asia as well. While the continent is blessed with strong domestic demand, lower benchmark rates than other emerging-market regions and softer inflation, they remain vulnerable to capital outflows on account of deeply negative real yields. Countries in China’s neighborhood are also sensitive to growth hiccups in the world’s second-biggest economy.

South Korea’s monetary-policy board was divided last month over when to halt the tightening cycle. Of its seven members, three wanted to stop after another 25 basis-point increase, two wanted to continue beyond that level, and one said enough had already been done. This dispersion of views underscores how tricky it is to gauge a terminal rate for emerging economies when the Fed isn’t done figuring out a peak. Meanwhile, officials dismissed as premature speculation forecasts by Citigroup Inc. and Nomura Holdings for rate cuts to begin as early as mid-2023.

In India, year-on-year economic growth more than halved to 6.3% in the latest quarter even as consumer-price growth remained above policymakers’ upper tolerance level. The nation was a laggard in raising borrowing costs and has cumulatively added only 190 basis points to its repurchase rate. This does leave room for further tightening, but could undermine its growth ambitions. The Reserve Bank of India’s policy path beyond a softer hike in December is a coin toss.

The need to balance between tackling inflation and sustaining economic activity will be seen across the world next year, but the dilemma has already arrived in Asia, Carlos Casanova, a senior economist at UBP SA, told Bloomberg Television.

All told, the clamor of a rate pause is only getting louder in emerging markets, underscoring a fatigue with hiking cycles. For instance, in Poland, the latest data showed a softer reading for the first time in eight months, and the arguments for an end to tightening have resurfaced at once.

“The scope for additional rate hikes is narrow, but strong commitment to leaving rates unchanged at a time of high inflationary pressure seems premature and inflexible,” Dan Bucsa, UniCredit SpA’s chief economist for central and eastern Europe, wrote in a note. “Central banks are committing too soon to ending rate hikes.”

--With assistance from Selcuk Gokoluk and Maria Elena Vizcaino.